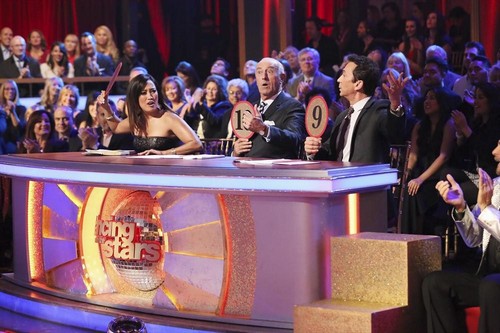 In the second round of DANCING WITH THE STARS tonight the remaining the six remaining couples will compete in a thrilling head-to-head “dance off” competition.  There will only be six teams competing because the couple who had the highest score in the first round tonight was awarded immunity.

Also on tonight’s show it will open with a dazzling and spectacular performance of Cher’s hit song “Believe” before she will join judges’ Bruno Tonioli and Carrie Ann Inaba to give critiques and scores on each celebrity routine.

The winning couples of the “dance off” round will be awarded additional Judges’ points that will be added to their overall score for the night. At the end of the show, Cher will perform her new single, “I Hope You Find It” from her current album, “Closer To The Truth”, which debuted at No. 3 on the Billboard Pop Charts, before one couple is eliminated.

Tonight is a touch night because the couples had to take on a dance style they have not previously performed including the Tango, Argentine Tango, Contemporary, Viennese Waltz, Jazz, Disco, and Foxtrot and prepare to compete in the dance off.  If you missed any of the videos tonight.  You can see them all right HERE.

It’s time for the Dance Off. Corbin and Karina get to pick the couple they want to dance off against, they choose Elizabeth and Val who choose the dance, the Cha Cha. Time for the dancing to begin; Carrie Ann thinks both nailed it, Bruno loved both as well, Cher thought both were sexy and tight.  All three judges vote for Corbin and Karina.

Time for the last round, Jack and Cheryl are dancing Disco against Bill and Emma. Carrie Ann says that Jack surprised her, Cher was amazed at Jack’s moves, Bruno thinks Jack turned disco into dirty dancing. All three judges vote for Jack and Cheryl.