BY Kinsley Goldman on May 20, 2013 | Comments: 5 comments
Related : Dancing With the stars, Dancing With The Stars Season 16, Performance Videos, Reality TV, Television 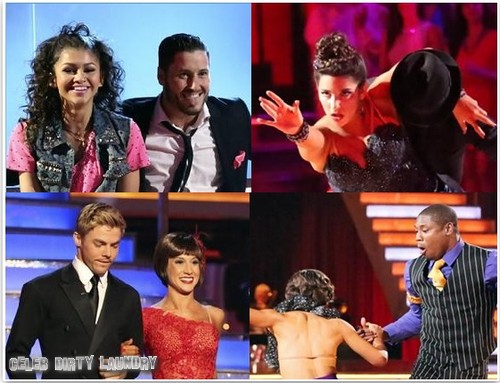 On tonight’s show the remaining couples will compete in three rounds of dance. In the first round, each couple will take on a new routine in a dance style that the judges would like to see again. In round two, the couples will be challenged to a Cha Cha relay, where each pair dances to a different section of the same song. In the last round — and one of the biggest competitive dances of the season — the couples take on a supersized freestyle featuring special effects, additional dancers and unexpected surprises.

All four of the couples are dancing the Cha-Cha in a relay. Each of the four remaining couples: Aly Raisman; Kellie Pickler; Jacoby Jones and Zenday are going to dance for 35 or 40 seconds, then leave so another couple can come onto the floor and continue dancing to the same song.

CHA CHA RELAY – JUDGES GENERAL COMMENTS! Judges comments: Len: “With respect to other stars, this is the four I think deserved to be in the finals.  You are all winners!  Well done!”  Bruno: “The magnificent four!  I don’t know what I am going to do!”  Carrie Ann: “Those were four different dances, I don’t know how to decide.”

Check out the video below and let us know what you think?  Who do you think he will be the forth couple sent home tomorrow?  Sound out in the comments below!