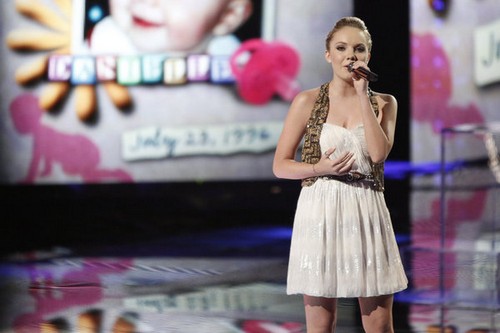 Danielle Bradbery took the stage tonight on THE VOICE for one of her final performances.  Danielle sang “Born to Fly” by Sara Evans for her new song  On tonight’s show the final 3 performed two songs  solo and one duo live in front of coaches Shakira, Adam Levine, Usher and Blake Shelton for America’s vote and a chance to win The Voice.  To see Danielle’s other song, “Maybe it Was Memphis” video, CLICK HERE …  To See Danielle’s Duo With Blake, CLICK HERE …

On tonight’s show the remaining thee artists took to the stage to sing three songs, two songs solo and one song as a duet.  One song will be a reprisal, one a new song and one a duet with her coach. Danielle will actually sing a trio of country songs tonight.

Did you miss tonight’s episode?  If you did we watched it andwe recapped it here for you.   If you missed any of the performances, you can see all the videos here!

Judges comments: Usher said, “It’s obvious that your did a great thing by electing to go with Blake.  You are definitely special.”  Adam Levine said, “What else can I say, your perfection is boring, you are amazing you are too good.”  Blake Shelton said, “As your  coach I would like to say coachy things, but honestly I am one of the millions of people you have wrapped around your finger.”