While The X Files fans were recently thrilled to learn that David Duchovny and Gillian Anderson may finally be in the same emotional place at the same time and giving things between them a whirl, they won’t want to know the details of David’s downward spiral. Back in 2008 David checked into a rehab program to deal with his sex addiction and that is one of the huge problems that ultimately led to the demise of his marriage to Tea Leoni.

According to the July 8th print edition of Star Magazine, even though David is often holed up in NYC (presumably with Gillian) he is anything but happy. The actor desperately misses his former wife and is gutted by all of the pain that he has caused his family. Instead of dealing with stuff he is just letting it fester. It has reached a point where he struggles to even look at his kids, West, 14, and Miller,  11, because they remind him of Tea. 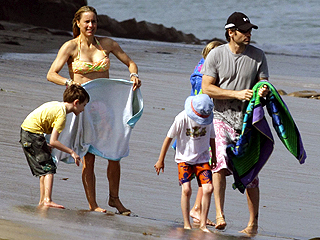 David has supposedly rented yet another apartment where he can be completely alone and he has chosen to avoid everyone rather than reach out for some help in dealing with his demons. Obviously Gillian gets David. I mean they have known each other for 20 years and she has watched all of the twists and turns that his life has taken. At this point do you think that she has pulled him closer in an attempt to help save him, or are they two peas in a pod for other reasons?

Gillian has had a few failed marriages that have produced three kids. Do you think she and David have more in common than we really know? As far as avoiding his kids, it’s a shame that he is this messed up. Avoiding the kids isn’t going to win any points with Tea either. Is it time that David gets himself a bit more help? Tell us your thoughts in the comments below!