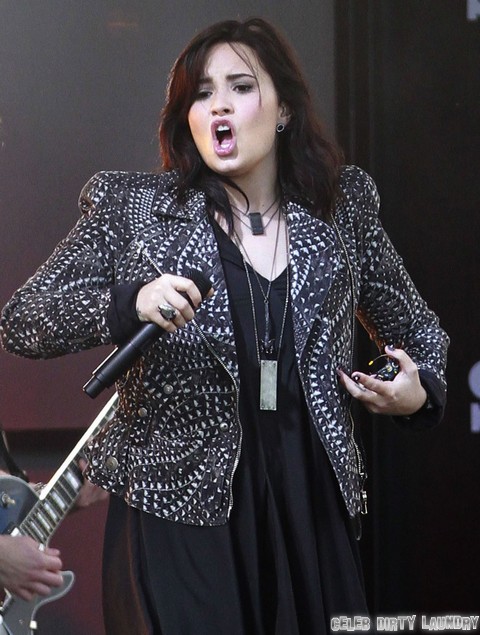 Go Demi. We need more people like Demi Lovato to speak out against this ridiculous new trend of ‘twerking’, made popular and put in the center of the pop culture debate by Miley Cyrus‘ ridiculous performance at the VMA Awards.

She tweeted, “Can the world stop talking about twerking please? Btw – no shade thrown.. Don’t even try to start that crap. Haha… the term twerking just needs to disappear like the word swag does too. I just don’t know what happened to the word ‘dancing’…. Can I getta amen?!!”

Now, Demi’s comments about twerking could be taken several different ways. One is that she’s just sick of the actual phenomenon and thinks it’s stupid, and she’s definitely not alone there. Another is that she actually meant it as an insult towards Miley Cyrus, which could also be the case. Demi and Miley used to be friends back in the Disney days, but rumor has it that they’ve parted ways in recent times. It makes sense considering Demi is very good friends with Selena Gomez, and Selena and Miley are also reportedly not on the best of terms – at least, not anymore. Not since Miley’s crazy and non-stop partying.

Obviously, Demi thought ahead and already stated that she didn’t mean her words as ‘shade’ towards Miley, but of course people are going to take it that way. I do agree with her that twerking in itself is a ridiculous trend that needs to go away, and it makes everyone participating in it look stupid – including Miley. I hope Miley’s friends have told her that, but if they haven’t, hopefully Demi’s words may have an effect.