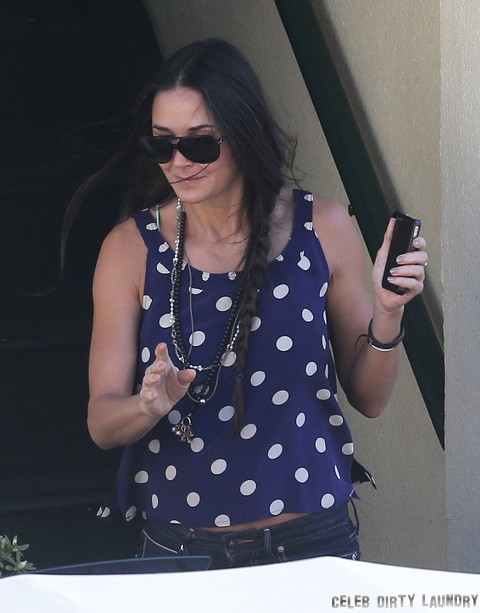 Somewhere in her absolute desperation to stay young and prove that she is still desirable to Hollywood’s most elite young men, Demi Moore clearly forgot to tap into any sort of moral code. After Ashton Kutcher hit the bricks a year and a half ago, Demi has spiraled into an erratic mess, systematically causing her three daughters with ex, Bruce Willis, to take three steps back. Just in case looking like the jilted, vengeful ex-wife wasn’t bad enough, she has opted to dip into her oldest daughter Rumor Willis‘ former dating pool.

Back in 2007, when Rumor was 19 she dated Harry Morton, owner of L.A.’s famed Pink Taco eatery. He is the guy who first broke Rumer’s heart, you know that one hurt that never really went away. It seems that Demi doesn’t give a crap about her daughter’s feelings and is completely focused on proving that she’s still a viable piece of Hollywood ass, because she and Harry have been hooking up since January. According to a source close to Demi, this has caused a death blow for their Demi and Rumor’s relationship.

“When Rumer found out Demi and Harry had been seeing each other she couldn’t believe it. She begged her mom to call it off but Demi was too flattered by his attentions and continued to see him.”

Things between the two were already bad because as the more mature of the two, Rumer believed that her mother should just let Ashton go and put an end to all of the ugly divorce battle. Now she also realizes that her mother is capable and willing to betray and hurt her more than anyone else ever has.

In case I didn’t already think that Demi is a craptastic mother, this really has sold me on the notion. Aside from the moral implications, why would she want a guy 20+ years younger? Eventually they have to get out of bed and then what on earth do they talk about? Is Rumer right for not speaking to her mother? Tell us your thoughts in the comments below!