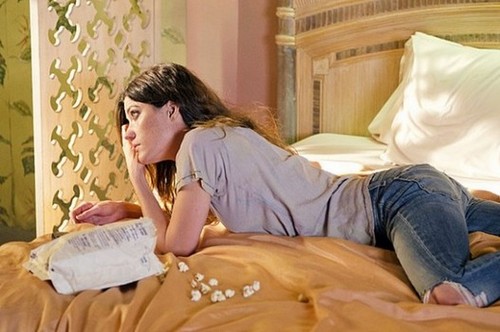 Its been six months since La Guerta’s death and Dexter is taking it amazingly well. But what’s even more amazing is Harrison is actually around he is flying kites and playing soccer and talking it really is a beautiful day. Dexter is at a memorial service for La Guerta, they are placing a park bench in honor. Deb has disappeared, not even Dexter knows where she is. (She is living it up in pay by the hour hotels doing coke).

At work Dexter finds out that Deb is doing work as a bounty hunter. Of all the things I saw this girl doing bounty hunting was not one of them. Dexter finally gets the 411 from Debs boss and he even hacks her bank account password. Three guesses as to what it is, first two don’t count. If you guessed “fucking password “ allow me to congratulate you. He goes to a crime scene in a pink shirt. ( who goes to a crime scene in a pink shirt?) This crime scene is where he gets his kill of the week, thanks tosome nut job that likes to cut heads open and take a piece of the brain out with a melon baller. (Allow me to say for all of us ewwww…those cute little trays of fruit will never look as good).

Dexter corners Deb in some kind of grocery store. Dexter ask why she hasn’t been returning his phone calls. Deb tells him it’s because she doesn’t want to talk to him or see him. She goes on to say she shot the wrong person in that trailer that night. The look on Dexters face is heart breaking ( real quickly I’m going to call BS on Deb, Dexter told her it was ok for her to shoot him that night in the trailer. She made the decision to shoot LaGuerta , the only person she has to blame for that is herself).

On the ride home Dexter is talking to Harry about Deb. Harry keeps telling Dexter it’s none of his business. Dexter meanwhile insist that Deb is just doing this as a means to escape (I’m going with Dexter on this one). Dexter is so pissed off that when a guy cuts him off he chases him down, hops out of his car, and starts choking him out. For a minute I thought we were going to get two kills of the week and there surely would have been had it not been for the guy’s son in the back seat.

Quinn is having sex with Miguel’s niece. (and pretty much on and off through the whole episode). When Miguel comes home. So Quinn sends the poor girl out there to distract him while he sneaks out. Miguel thinks she was exercising. ( yeah she was doing Quinnarobics). She convinces Miguelb to pick out some things of LaGuerta’s and keep them.

Next we are at the police station and the Captain has a friend of his come in to speak to the detectives and Dexter how about the melon baller case. She concludes that the killer is trying to talk through his victims. Dexter is super nervous while she talks. Especially when she points out that the hallmark of a psychopath is that they have no empathy. (She is a Dexter whisperer). Everything this lady says is a characteristic of Dexter. Dexter looks her up in the Internet. Her name is Dr. Evelyn Vogel. About this time Miguel walks in and hands Dexter a blood red vase (how perfect is that) to remember LaGuerta by. Dexter isn’t to thrilled. Miguel assumes it is because Dexter still hasn’t forgiven her. Miguel ask him to take it that it will help him to feel better. Masuka comes in and tells Dexter he is wanted in the morgue. Once again Dexter is not thrilled.

Debs skeeze boy toy who she was suppose to have been catching is doing coke off a switch blade. Deb is laying in bed watching. He gets a text and then gets up and looks out the window. He goes outside and when he does Deb calls Quinn for some help.

Back to the morgue. Dexter is super uneasy around Dr. Vogel ( I would be too if she knew my inner most thoughts) she ask if they found any DNA on the body. Dexter tells her they did not. I have to say I really am enjoying watching Dexter squirm like a worm on a hook. Dr.Vogel tells Dexter that they both chose murder as their profession and maybe they both are a little crazy. Dexter replies with a uncertain maybe. (I would love to see these too work together.) She even brings up the Bay Harbor Butcher. She is so on to it having been Dexter. He is so freaked out he goes to his Boss. Miguel’s niece drops Harrison off at Dexter’s work.

Deb and her mark (I know I keep changing it but honestly I have no idea what to call him at this point) are laying in bed watching TV when his phone rings he is going to meet the guy he was talking to earlier outside. He whips out a gun and tells Deb to stay put.

Dexter is in his office looking up the name of the guy Debs guy is going to meet up with and finds out he is a hit man. Harrison accidentally breaks the vase when he is spinning around in a chair. Dexter goes off on the poor kid. He catches himself and apologizes. Then leaves the room to call Deb. Of course it goes straight to her voice mail. He goes by Quinn’s ( cause he isn’t answering his phone either , hint hint wink wink). He ask him if he knows where Deb is staying and he says yes some dump called the Pink Motel. Dexter picks up Harrison and takes off. He calls Quinn again (no answer). If I had done a shot for every time somebody didn’t answer the phone on this episode I would be so drunk right now).

Dexter is driving down the road. With Harrison in the back seat. Dexter is on a mission to find Deb. He reaches the motel and Harrison is sound asleep in the back seat, holding a puppy ( that reminds me of the one in Andy’s police car on tonight’s episode of True Blood). Dexter calls Deb one last time (totally should have been doing shots). He glances back at Harrison asleep with a s ad look on his face.

Dexter walks up to a window of one of the rooms and sees Deb. When her guy is out of sight Dexter knocks on the door. Deb answers and is uber pissed to see Dexter. So pissed in fact she doesn’t even want to listen to or let alone believe him when he tells her the guy she is with is about to get blown away by a hit man. She is all like yeah, ok, sure whatever thanks for telling me. Dexter tell her she could die. She tells him she doesn’t care. That she wakes up every morning regretting every decision she ever made because of him. Dexter tells her he is sorry. Deb just gets angrier. ( this whole scene is really heart breaking, mostly because its Dexter trying to protect one of very few people he has ever cared about, while that person is essentially telling Dexter she no longer needs him or his protection.) The guy walks outside and sees Dexter. Dexter grabs Deb and the guy pushes him. Dexter shoves him back into the room and punches him. The guy grabs for the switch blade and Dexter gets a hold of it first and then without even a second thought rams it into the guy. ( thanks to Dexter I finally have a name for him..dead…what? To soon?)

Deb is in tears, she can’t believe what she has just seen. Dexter tries to tell Deb she is lost, she tells him that he is the one who is lost. Deb calls it in. Dexter gets back to the car and Harrison isn’t there. Dexter starts screaming for him. He comes from behind him. Dexter runs and grabs him.

Back at the no tell motel Deb is answering questions from the cops, telling them she has no idea who killed the guy she went out to get a sandwich and she found him that way when she got back. She calls her boss and leaves him a message. All the while the hit man is watching her.

At home Dexter notices that his sons stuffed puppy has blood on it. he picks it up puts it under the faucet and starts washing it. The Dexter Voice Over tells us that Deb was right, he is lost, without her he doesn’t know who he is. He is sitting on the bench with LaGuerta’s name on it. Dr. Vogel walks up and tells Dexter she has something she was hoping to share with him. Dexter tells her he isn’t in the mood. So she hands him a envelope and leaves.

Dexter opens it. It’s full of all these drawings. The last one has Dexters name on it. He rushes after her and grabs her. She tells him he can’t kill her. Dexter ask her why not? She replies “I don’t fit Harry’s code”. She walks away. We see Dexters face he knows she knows (told ya).