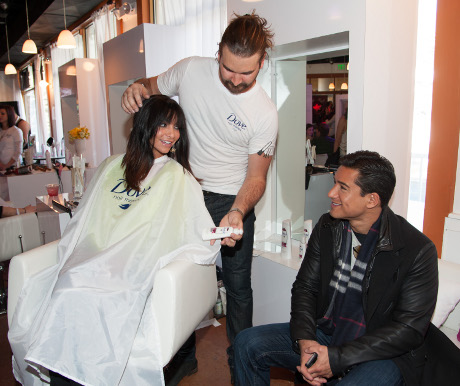 The Sundance Film Festival is a place where all the stars flock, primarily to celebrate some of the year’s best creations in the cinematic arts. Many of the films that premiere at Sundance go on to be major hits, and it has been the jumping off point for many of the world’s top directors and actors. And with the presence of actors comes the presence of style, fashion, and the need to look fancy and good, so we wanted to give you all a quick glimpse into the Dove® Color Care Salon. Several top celebs were spotted at the station.

Dove® Hair premiered a short video this weekend about the many meanings and importance of color. Colors can bring on a multitude of meanings and colors have the power to incite particular moods and even bring certain joys to a person’s life. With that in mind, and drawing upon the idea of color as a transformative and enriching element in one’s life, Dove® celebrates the power of healthy, vibrant hair.

According to the press release we received, “The salon, part of the Talent Resources Gifting Suite, brought color to the winter white landscape of Park City’s premiere film festival and marked the launch of the NEW Dove® Color Care collection that keeps colored hair vibrant for up to eight weeks.”

Without a doubt all those celebs left the station with healthy, shiny, newly protected hair. And there’s one thing we know for sure, and that’s celebs love their hair, especially when it’s been colored. So why not use something that can protect that sparkliness for an extended period of time? Check out the photo gallery below for some up close and personal pics.