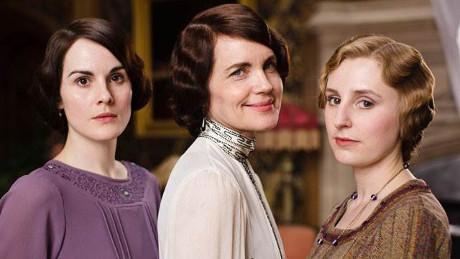 Downton Abbey season 4 will be arriving on UK televisions this fall and US televisions at the start of the new year, so many of you are going to have to wait a while to be reacquainted with your favorite period drama. But, in the meantime, the show released a handful of amazing, spicy new stills that’ll have your inner fangirl/fanboy screaming with joy. Also, we managed to find a few juicy spoilers to tide you over — so if that kind of spoilage upsets your stomach then you might want to divert your attention now. We warned you.

According to Executive Producer Gareth Neame, the hit period drama will demonstrate that the show “never sits back on its laurels. It shakes up and moves on.” He also states that the backbone of this upcoming season will largely focus around Lady Crawley, recently widowed, as she transitions into the next stage of her life. The audience — and cast — will still be feeling the untimely death of Matthew.

Neame adds, “[we] Have always said that while it was clear we didn’t want to lose Dan, we weren’t able to persuade him (to stay) and so we rethought the whole thing. It was positive for the story.”

Producers also said that this season will continue doing what it does best: effectively capturing a tone that, always shifting and changing, is equal parts drama, romance, and intelligent comedy. The show is wonderful, and it’s refreshing to see something like this doing so well in the mix of other cookie-cutter series (which, don’t get us wrong, we love, too).

Check out the photos in the gallery below and let us know what you think. Are you looking forward to the return of Downton Abbey series 4 (season 4)? Us Americans will have a bit longer to wait, but I’m sure the diehard Crawley fans will figure out a way to snoop around Grantham Estate to get their fixes.

Keep your eyes open for more Downton Abbey season 4 spoilers! And if you find them before we do, feel free to post them in the comments section below.