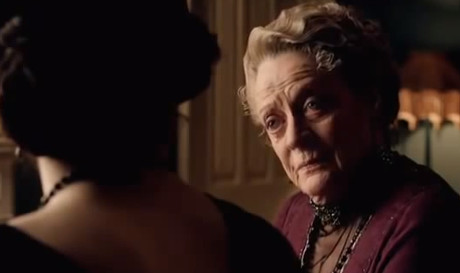 The Downton Abbey season 4 trailer opens with the Dowager Countess saying, “You have a straightforward choice before you. You must choose either death or life.” Lady Mary looks at her and responds, “And you think I should choose life?” The Dowager Countess, with her brilliant face and infinite wisdom, raises her eyes. Of course you should choose life, Lady Mary! We don’t want you to die! Don’t die!

From that moment on, the trailer picks up with intensity, playing a fast-and-furious montage to music by The Joy Formidable. If you can make it through this trailer without feeling even the tiniest glimmer of hope and/or giddiness for the upcoming season, then . . . . Well, I don’t think you’ll be able to.

Some of the clips have already been shown in the past, but the trailer does a nice job getting its fans amped up for its return to British television this coming September. What do you think of the choice to use contemporary music in a period drama? Do you appreciate the juxtaposition, or do you wish they’d gone with something a little closer to the times — which are constantly changing as the series progresses, with large gaps in between the narratives of each season.

Check out the high-octane (well, as “high-octane” as period dramas can get) and let us know what you think. Are you excited for its return? Are you a Downton Enthusiast? US fans won’t be able to watch until January 5th (unless you have some sneaky way to stream British TV, in which case you can indulge this coming September).