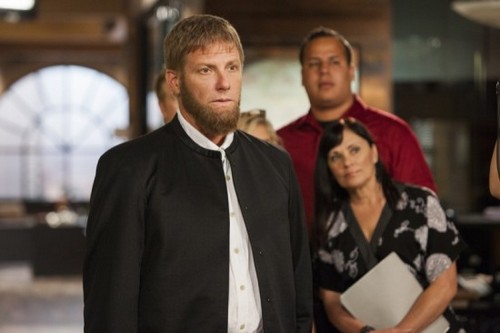 Tonight on Lifetime DROP DEAD DIVA continues with a new episode called, “Jane’s Secret Revealed.” On tonight’s show Stacy suffers an awkward humiliation at yoga class, a chivalrous Owen comes to her rescue.  Did you watch the last episode?  We did and we have a full and detailed recap, right here for you.

On the last episode Jane represented Deb’s mother, Bobbi Dobkins, in a scandalous case involving sex solicitation. Owen sent Grayson on a field trip to Wyoming where he had to try a California client’s case under Wyoming law. Nicole and Grayson’s relationship took a turn. When Stacy suffered an awkward humiliation at yoga class, a chivalrous Owen came to her rescue.

Tonight’s episode is going to be another great one, which you won’t want to miss. So be sure to tune in for our live coverage of Lifetime’s Drop Dead Diva Season 5 Finale “Jane’s Secret Revealed,” tonight at 9PM EST! Remember also to bookmark Celeb Dirty Laundry and check back here for our live Drop Dead Diva recaps, reviews, news, and spoilers!

Jane and Stacey rush to the hospital to see her mother and guess what. She’s fine. She’s also shocked that Jane came. She only fainted a little at an event and now the doctor discharged her. Just to make sure her mom is ok; Jane invites her to stay with them for a few days. An act she soon regrets once her mother finds out about Stacey’s baby. With all the people that told Jane she should get over it, her mom agrees with her but then gets told to shut it. Yes, it’s messy and she doesn’t need someone to tell her that at this point.

Later Jane is getting coffee when she spots some trouble between a cop and an apparent Amish man. She helps them both settle their dispute when the Amish man goes on to tell her about why he’s so far from home. A big oil company is taking advantage of him. She got him a sit down with a representative to help settle the matter. However the other side never made a written agreement with him over polluting his water. Jane knows they have case but her client doesn’t want to sue. It’s against his religion. Something the other side also knew when they made the agreement in supposed good faith.

Jane can’t sue the company and yet she found a new way for them to honor their agreement. She’s going to shame them. She went to Nancy Grace to make a public appeal for the oil company to clean up the tainted water and pay for the little girl that fell ill from it. Their plea attracts a clean water company. The Amish can’t sue but they can in the name of the state.

Jane was just thinking about how to win her case when Grayson informs her that mother has passed again. The doctors say her mother needs rest but that it could have been simply a dizzy spell. She leaves her guardian angel to watch over her and goes back to work.

She’s at the office creating a strategy when her client, Jacob, is spooked from someone in the past. His son arrived at the office wanting to speak with him but Jacob refused. His son left the company and is so shunned. The son left to be with the woman he loved. Jacob can’t catch a break though. Later in court he finds out that organization offering to help faked the water contamination results.

Jane goes back to the hospital to visit Elaine when she noticed her mom is throwing a fiesta from her hospital bed. Mariachi band included. She pulls Paul aside ready to be angry when he explains why he allowed her mother this. Elaine is dying but she doesn’t want Jane to know. Elaine has a brain tumor. So Jane pretends she didn’t learn the truth and allows her mother’s party to continue. She wants her to be as happy as she can.

Jane tells Stacey about her mom when she gets home. She feels so bad about telling her mom to stay out of her earlier. Stacey reassures her that Elaine understands. All mothers do. That’s why Stacey is at the moment trying to get her unborn child on the wait list to a preschool. She was about to be turned down when the director found her baby was artificially inseminated. It’s diverse enough for the school. Now all she has to do is pay 25,000 towards the new pool at the school. Owen doesn’t want her but she will do anything for her child.

She eventually does not pay though. She wanted to do all of this in case her child wasn’t as bright as Owen. The baby could take after her but Owen said he’d be there to help no matter what.

Jane and Jacob realize the environmental company was a sham. It was set up by the oil company in order to pay legitimate claims look false. She got the judge to dismiss the company’s testimony but no longer has someone suing on Jacob’s behalf. Jane has an idea and Jacob may not like it. She’s going to use Jacob’s son Isaac. He owns a small part of the land. Which means he can sue on behalf of his father. When it comes down to it Jacob backed Isaac’s claim.

They won their case. Still Isaac wants to be acknowledged by his father. Jacob doesn’t say anything but he does hug his son. He had missed him too. Seeing them reconnect, Jane goes to be by Elaine’s side. She apologized for not being a better daughter. Elaine forgives her and even admits she knows she’s not her daughter. A mother knows her child and the Jane that came back after the shooting wasn’t her daughter. Nevertheless she loves her.

Elaine passed away not long after that. Grayson went over to Jane’s when he heard the news. He wants to comfort her after her loss when the two fall into making out. They’re stopped by the real Jane. She’s angry Jane didn’t reach out to her in time for her to say goodbye to her mom. Out of pain or spite, Jane/Britney tells Grayson that Jane isn’t really Jane. He needs to ask her who she really is.