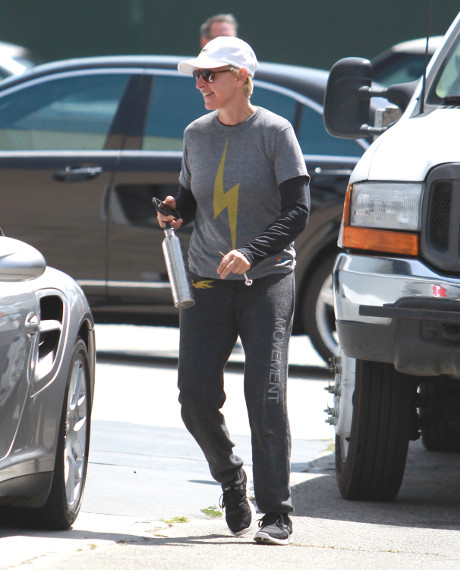 Ellen DeGeneres, the ruler of daytime talk shows, has allegedly come out against Kris Jenner and her desperate attempts to continue her Kardashian brand via a talk show, which many people aren’t entirely crazy about. The National Enquirer has made a claim that Ellen is outraged over Kris’s explosion onto the scene, and the fact that her first airings did extremely well might be to blame for the minor dose of jealousy. But what apparently has Ellen even more  bothered is the fact that Kris doesn’t take the role of talk show host seriously, that she doesn’t truly care about her guests but only the ratings she’ll garner.

“She’ll make a mockery out of talk shows because she doesn’t care about her guests,” Ellen said, according to a source for NE. “She only cares about herself.”

The straw on the camel’s back for Ellen was when she tried to make everyone think that she’d be revealing Kim Kardashian’s baby (North West) to the world. Kris went so far as to pose for a picture with a lil baby nugget — but the baby was just a decoy to pull in viewers!

The source continues: “There may be some jealousy involved on Ellen’s part, but when Kris popped up on the show with a baby, briefly faking the audi­ence into thinking it was Kim’s, it seemed to prove Ellen’s point that Kris is only thinking about ratings.

“Ellen thinks that Kris is using a string of celebrity co-hosts because she doesn’t have the personality to carry a show by herself,” continued the source. “And she doesn’t believe Kris sets a good example for teenage girls, seeing how the Kardashian kids are spoiled rotten.”

Many people are saying that this feud is not true at all, and I actually have a hard time believing that sweet Ellen would lash out against Kris like this. But, I think many people will agree with these statements, whether they come directly from Ellen or not. What do you think about Kris’s new talk show?