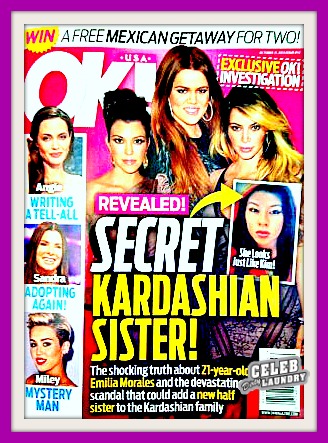 The most recent edition of OK! Magazine screams on its front page that a secret Kardashian sister has been revealed, and her name is Emilia Morales, allegedly the love child of Robert Kardashian and a secretary with whom he had a brief fling with while on a business trip way back when. The magazine goes on: “The shocking truth about 21-year-old Emilia Morales and the devastating scandal that could add a new half sister to the Kardashian family.”

Wow! What a headline. Do we believe this claim? Umm . . . . Perhaps when someone provides a legitimate DNA test, then we might be inclined to align ourselves with these theories. Apparently, the mag’s supporting evidence is largely based around Emilia’s looks — which roughly resemble the Kardashian charm — and the  claims that Morales’ mother might have “had an affair with Robert when he was in [the London area] on business and she was working as a secretary.”

“Robert had secrets he hid from the family,” says the mag’s insider, who goes on to make the claims that many people are aware of Robert’s shady past and, therefore, the idea that he could’ve fathered this girl is not entirely outside the realms of possibilities.

What do you think about these claims? We’d love to have a new Kardashian to put on our radars! Supposedly, Emilia, who’s studying engineering, “lusts for the limelight and sort of reality TV fame that the Kardashians now have.” Do you think she’ll get her dose of the limelight in the coming months? She definitely got a taste of it with this article — who wants to bet that she’ll be back for more? Let us know what you think in the comments section below! Wonder what Khloe Kardashian, Kim Kardashian, and Kourtney Kardashian think about this situation?