Eva Longoria Dumped Ernesto Arguello Because He Was A Gold Digger and Bad in Bed? 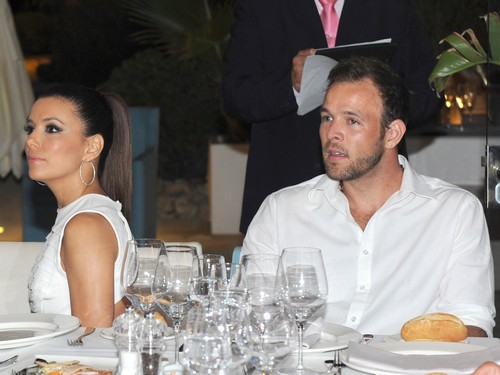 We’ve heard for so long about Eva Longoria just wanting to find a great guy to settle down with but apparently once that situation potentially arose she thought twice. She hooked up with Ernesto Arguello when he was a contestant on her very short lived dating show and the two were a public PDA-fest until a few weeks ago. Then after meeting each others’ families and pretty much declaring their undying love it all came to an abrupt halt.

According to the Sept. 9th print edition of Life & Style they fell hard and fast, then decided to allow work to keep them apart. Eva is based in LA while Ernesto works out of Miami and the two now claim that it’s impossible to make it work with their schedules. Something tells me that there’s a little more to this story that we have yet to hear. Otherwise Eva was handed exactly what she thought she wanted most and then realized that it wasn’t really after all.

Long distance relationships are tricky but we are talking about celebs who have the means to hop coasts whenever time allows. Dropping everything for a weekend is easy for both of them, but it’s not something that they are willing to do any more and believe me, there’s a reason for that! Do you think Eva got cold feat because they heated up so fast and it freaked her out, or did one of them screw things up and that caused the abrupt split? Was it really love for Eva and Ernesto or pure lust that eventually wore off leaving them with little to talk about? Tell us your thoughts in the comments below!

Editor’s Note: How about this theory – Eva, with her new Masters degree, finally figured out that Ernesto wasn’t so earnest after all and was a total gold digger – plus not so hot in bed?