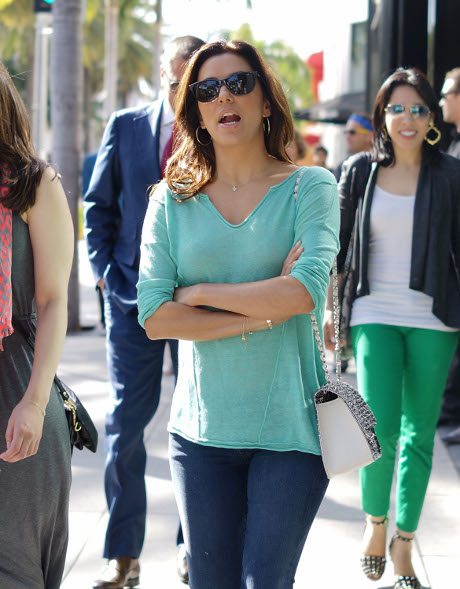 According to new reports, Eva Longoria always goes commando – on purpose. In Touch Weekly reports that Eva’s wardrobe malfunction at Cannes – you know, when she didn’t wear underwear and flashed everyone her privates – wasn’t an accident, because Eva never wears underwear.

A source close to Eva reportedly told gave In Touch an example of Eva’s refusal to wear underwear, even at fancy events, explaining, “For Mario Lopez’s wedding, she went commando, was thrown in the pool and flashed everyone. Her close friends are getting annoyed because they think she only does it to get attention from men. And they don’t want that attention to come from their husbands!”

Well, I can see how her lady friends would be a bit wary if this was true. That’s a big IF, right there. I know plenty of women who go commando, simply because it’s more comfortable. However, going commando at a public event in a sheer dress and where hundreds of people will be photographing you seems like an unwise choice. In today’s world of celebrity stardom, even the most idiotic celebrity knows that you need to be careful with your outfit, for fear of photographers getting an intimate shot.

Sure, everyone makes mistakes – Anne Hathaway’s flashing incident comes to mind, as does Longoria’s wardrobe malfunction in Cannes. But that being said, people have stylists, designers, and publicists helping them for a reason. I mean, if you’re a Kardashian or a reality star, it doesn’t matter that much, but I think every Hollywood star thinks twice before going commando at an event like Cannes.

Then again, what do I know? Eva Longoria could be going commando to draw all the male attention — and the attention of the tabloids — to herself. This is Hollywood, so anything’s possible.