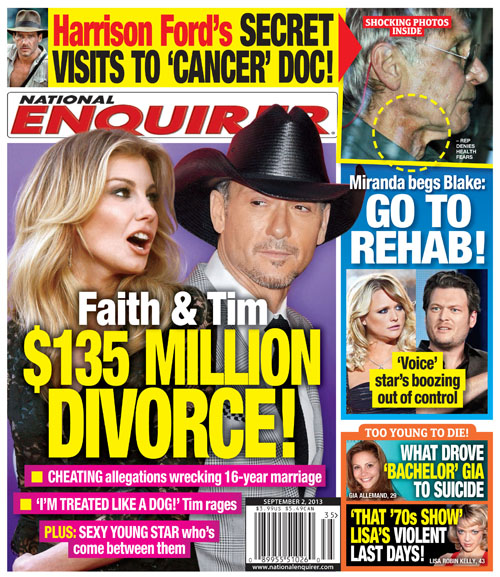 According to the newest issue of National Enquirer, Faith Hill and Tim McGraw are headed for the always popular Splitsville. Now, while this is still largely based in rumor, the tabloid claims that there’s a sexy star coming between them and bouts of cheating have wreaked their amazing 16-year marriage! From the magazine alone, it sounds like Faith has *allegedly* been cheating on Tim, as there’s a quote by Tom, which says, “I’m treated like a dog!” But there have definitely been rumors of Tim getting cozy with other ladies in the past, so perhaps this marriage chaos walks a two-way street.

According to the mag, “the couple’s life has turned into a battlefield, and now Tim is threatening to walk for good.” Enquirer also claims to have “uncovered the sensational details of the conflict that’s left the superstar couple’s marriage and their $135 million empire hanging by a thread.”

While the clips the tabloid does provide are truly scandalous in nature, some have said that the actual details and evidence surrounding these allegations are severely lacking. While many won’t believe this story, there’s no hiding the facts that Faith and Tim’s marriage has been the center of debate for years now. This could be because there truly is something that’s going sour between them or because absolutely nothing is wrong and Hollywood Haters are just trying to find a reason to break apart a good thing. To stir up drama. We know better than anyone that people love themselves some good ol’ juicy drama.

Whether you choose to believe the story or not is up to you, but the Enquirer’s divorce prediction rates aren’t always horrible, so perhaps this couple’s romance is finally going to burst into flames? Let us know your thoughts in the comments section below!