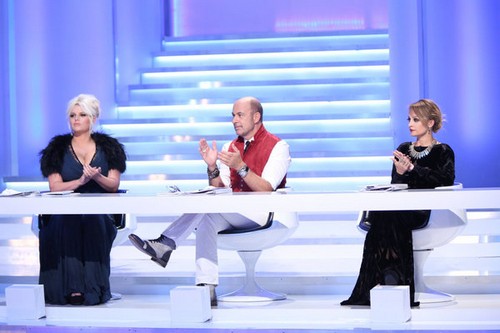 Tonight on NBC their reality competition FASHION STAR returns with the sixth of the season. The show features celebrity mentors Nicole Richie, John Varvatos and a pregnant Jessica Simpson. On tonight’s show called, “Buyers Choice” the the designers work one-on-one with the buyers in order to better understand their visions. Among the fashion faux pas: One contestant completely disregards advice.

On last week’s  the designers were challenged to work in pairs without killing each other. They had to create two separated pieces, which would be worn as a complete look.  At the end of the show John announced that two members of his team, Amber and Brandon were in the hot seat. Caprice voted to eliminate Amber; Terron voted for Brandon, leaving Erika with the deciding vote… and it was Brandon who was eliminated.

On tonight’s show the buyers sit down with the remaining “Fashion Star” designers and give them an idea of what they are looking for and what they would like to see from them. The designers are given the chance to prove themselves in areas where they might be lacking. The consultations leave one contestant feeling insecure about his designs and another completely disregards the advice. The buyers send the 6th designer home.

Fashion Star Season 2 Epiosde 6 airs tonight at 8:00pm ET and we will be live blogging all the details. So don’t forget to come back and refresh your screen often for live updates. While you wait for the show – check out the sneak peek video of tonight’s episode below!

RECAP: The challenge this week is Buyer’s Choice, the designers meet with each designer and unless they believe in them, they are not going to go anywhere in this business. Sylvia meets with Caprice from Macy’s who tells her to be accessible and versible. Terron from Saks tells Sylvia to do something black and comfortable. Erika from Express meets with Daniel, she tells him that she wants him to think about his designs and scan the room, ask himself if every woman would want to wear the design. Terron thinks Daniel needs to concentrate on clothes that are salable. Amber really wants Macy’s to buy her designs, they haven’t yet, Caprice needs to see if she can design a full capsule collection.  Caprice thinks JesseRay and Garrett have strengths and hope they bring it. Johanna is working hard to execute something that the buyers are going to love. Daniel is struggling, Nicole thinks he really has to work on making things more commercial. Sylvia is going to do a jumpsuit but she is worried about Hunter because she is the designer that has sold to all the buyers. Amber is out to prove that she is the next Fashion Star ad in this challenge she is doing a blazer. Daniel is doing a jacket, he is nervous but feeling good. Johanna thinks Daniel is being too creative, she thinks sometimes simple sells more.

Sylvia is freaking out, she is not ready and her design is complicated. Hunter knows anything can happen and this time she is doing a romper to hopefully get the buyer’s attention. It is time to showcase the designs.

Jessica’s designers are next; Hunter with a romper, she gets $100,000 from Macy’s and $125,000 from Express which starts a bidding war and Macy’s wins with $200,000. JesseRay & Garrett are up and they are showing off a rocking style with their design but buyers found it limited and there were no offers.

Nicole’s designers are now ready to showcase their designs; Daniel is first with his Illusion Jacket and there are no offers from any of them as they found it over-engineered. Johanna is up with her Modern Blouse and Macy’s bids $50,000, Express $70,000, Macy’s goes up to $90,000 which stats a bidding war and Macy’s wins it at $165,000.

All seven of the designers can be eliminated, sale or no sale moving forward, it is all up to the mentors.

Macy’s votes to send Amber home tonight, Express votes for Daniel, Saks votes for Amber so it is Amber that is going home tonight. The mentors think it is a smart decision. Next week the designers go out on the town with a special twist.