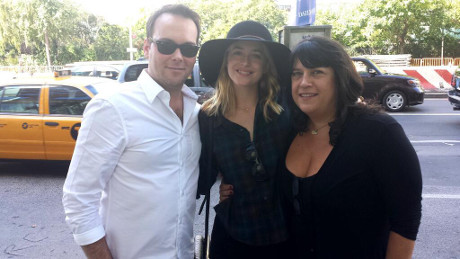 Now that the cast has been strapped down (with leather and chains), the Fifty Shades of Grey movie has begun filming. But there’s one person who’s absolutely terrified to watch everything unfold: E.L. James, the woman behind the massively popular franchise. She says that her fanbase is, as we know, ginormous and that they deserve the story to be told right. If it’s not, if the fans ultimately deem the film unworthy for whatever reason, she admits that she’ll feel personally responsible.

While she hasn’t agreed to do many interviews, she did sit down to speak with Entertainment Weekly. She said, “I’m terrified. Completely. I’ve been terrified from the moment I published the book.  My mother was terrified of everything, and so am I. It’s a terrible way to grow up. You don’t expect this kind of success. Even now it floors me. My only ambition for the books was to see them in bookstores. This is huge. And there is this passionate fandom; we need to get this right for them.”

Even though she does harbor some reservations, she’s ultimately looking forward to the final result, even if she was apprehensive to option film rights in the beginning. “I didn’t know if it was the right thing to do. And then I thought, “I’m middle-aged; when in the hell am I going to get another chance to make a movie in Hollywood?” That was the final thing: Let’s go for it. Let’s see if we can have some fun with it.”