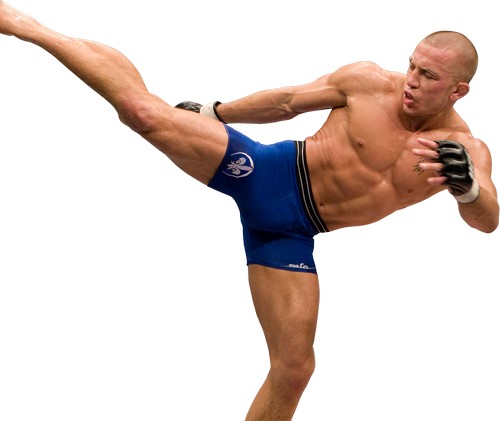 UFC star Georges St-Pierre is never, ever going to admit the reasons he’s taking a break from the UFC. His strategy is to deny, deny, deny, and he’s sticking to that.

TMZ caught Georges at LAX, where he was seen departing to Montreal. He claims that he’s going to Montreal to begin training on Monday, even though sources close to him have stated that he’s taking a break from the sport.

Of course, TMZ’s sources claim that the REAL reason Georges is going to Montreal is because the mother of his child lives there, and he’s still on a mission to convince her not to have the baby. When asked about the rumor by the photographers and paparazzi at the airport, Georges denied the claims – but his shifty behavior and demeanor certainly didn’t match up to his words.

Right now, Georges wants his baby mama to have an abortion. I mean, he obviously doesn’t want to pay millions in child support, which he’ll no doubt have to do if the woman ends up having his child. And I’m sure all these thoughts have crossed through her head as well, the fact that her baby would never have to deal with financial instability.

Georges also denies that there’s any health issues with any members of his family, despite the reports that his father is very sick and possibly dying.

Basically, Georges is denying everything and pretending as though everything is rosy and perfect. This is all in spite of Georges himself going public with the fact that he was taking a break from UFC. During his post-fight interview at UFC 167, he was quoted saying that he was having trouble sleeping and was very stressed out over all of his personal issues. He’s clearly backtracking over his comments, but too little too late Georges.