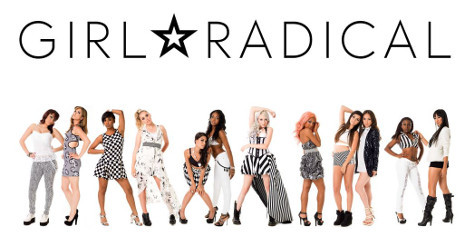 Girl Radical is the new girl super group formed by former ‘N Sync member and producer JC Chasez and, in light of the recent release of their debut cover single and video of No Doubt’s “Just a Girl,” we’re excited to have them take over our Twitter for an hour today at 2 PM PST. So don’t forget to head on over to our Twitter @celebdirtylaundry and make sure to tweet them all your important questions — or just take a moment to meet them!

In an interview with Billboard, JC Chasez introduced Girl Radical and talked a bit about the inspiration behind the formation of the group, quite different from others you might be aware of when taking into consideration its size:

“Jimmy [Harry] and I have been friends for many years, and we’re always writing and submitting things for different artists. We always talked about starting a project from scratch, but we didn’t know what it was going to be. One day we ended up working with this Japanese artist and she showed us the this thing called AKB48. Basically it’s a Japanese group that started with 48 members and has fluctuated anywhere from 48 to 60. It was like this army on stage performing, and I’ve always been attracted to the spectacle.”

Girl Radical also has a web-series that’s going strong on YouTube, which gives new fans an introduction to their group as well as a behind-the-scenes sneak peek into their professional lives, all while working alongside mentor JC Chasez. Check out the most recent episode below, and don’t forget to check out Buzznet later today for the premiere of episode 5!

Behind the Scenes Episode 4: