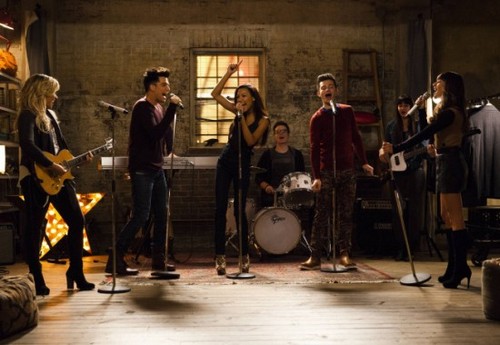 Tonight on Fox GLEE continues with a new episode called, “A Katy or a Gaga.”  On tonight’s showJake gets closer to Bree (Erinn Westbrook) as he and Marley grow apart.  Did you watch the last episode, the tribute to Cory Monteith?  We did and we have a full and detailed recap, right here for you.

On last episode the McKinley family of the past and present joined together to remember and celebrated the life of Finn Hudson.  Cory Monteith, who played Finn,  was found dead in a Canadian hotel room in July of an accidental alcohol and drug overdose that ended his long,  fight against addiction at age 31.

On tonight’s show the members of New Directions tackle their assignment of getting out of their comfort zones and determining whether they’re more like “Katy” (Perry) or (Lady) “Gaga.” Kurt holds auditions for his new band and must decide if he’ll let in the overly bold performer, Starchild (guest star Adam Lambert). Meanwhile, Jake gets closer to Bree (Erinn Westbrook) as he and Marley grow apart.

Will walk in to tell the Glee club who they’re going to be going up against, Tina freaks out and yells no! It turns out that the Glee club aren’t confident with the upcoming competition. Throat Explosion is the name of the challengers that they fear that they can’t beat because of how strong and good they are, Will decides to make everyone work on the weaknesses this time in order to win nationals this year. Kurt is going to be starting his own band, something that involves being a Madonna band he goes and asks Rachel and to join this band with him; he gets two girls who also work with Rachel to join; though they’ll have to go through auditions.

Sam talks to Penny, she speaks about her time being at a Skrillex concert; Sam then asks if she’s interested in going out some time with him somewhere, but she’s going to a Nine Inch Nails concert with her ex. Sam is talking about how he’s wanting to date Penny even though she’s a fan of Skrillex and Nine Inch Nails. Artie talks to his girlfriend in the school hallway, confirming if she’s okay with dating someone who’s so “different”; she obviously doesn’t mind at all. Kurt is sitting down waiting for people to audition, Kurt doesn’t want to call the band the Apocalypsticks; a guy walks in with a very flashy top hat and suit that he made himself.

The guy who begins singing Marry the Night by Lady Gaga and Adam Lamber gives one hell of a performance like usual. Right at the end of the performance Starchild throws the microphone like a badass; Kurt says that he doesn’t want Starchild to join his band, though if he tones down his image then maybe he would reconsider his decision. A girl walks into the principal’s office dresses up as Lady Gaga, Sue is sitting in her chair also dresses as Lady Gaga, well she’s only wearing a mask that Lady Gaga once wore; they talk about how it’s going to be a Lady Gaga and Katy Perry week. Marley is talking to her boyfriend about they’re upcoming date, but her boyfriend doesn’t look all that much interested in it; he wants to try doing something new this time. Marley tries to bring up other things they could do, but her boyfriend Jake seems cool about it.

Sam wants to make the Glee clubs performance far more edgy than usual, same decides to go out and find people to help out with spreading the word of the Glee club. Rachel starts speaking about how Kurt passed up on having Starchild in his band, Rachel mentions how special Starchild is; Kurt believes that Starchild’s look is far to edgy for what he’s looking. Kurt wants to be something that everyone wants to see, he wants to become something very successful; though Rachel keeps up bringing up that Kurt shouldn’t worry about it, which he needs to have Starchild. Marley is talking to about getting John Mayor tickets, her Jake doesn’t look a hundred percent pleased about it; but makes a quick save and says that he’s looking forward to it.

Will is teaching a class about Native Americans, though he’s interrupted by an announcement on the PA by Sue. On everyone’s laptop is Sam looking extremely edgy or very weird, turns out that it’s just a teaser. Sam then goes and tries to pick up Penny once again, this time though he’s somewhat successful. Tina and Mercedes talk about what they want to do in their upcoming performance, now Mercedes starts talking to Marley about how Jake could be cheating, Marley decides to check up on Jake to see if that’s true. She sees Jake helping out with choreography, she’s a bit worried; but brings up that she wants Jake to like her for being herself. Sam begins to perform his edgy performance for Will, he’s singing Applause by Lady GaGa, and I’ve got to say he’s got a nice pair of wings; later in the rest of the Glee club join singing.

Sam brings up the sea shell bikini that Marley was supposed to wear, but she decided not to wear it and ends up getting suspended for the rest of the week. The Glee club is arguing about their upcoming performance, turns out that they’re deciding about making their performance more Katy Perry like. Kurt is working and Elliot Gilbert who’s known as Starchild is there, he found Kurt at his work place needing to join his band because he wants to really do it.

Kurt talks to Elliot about what he wants to do, that he came showing up as Starchild to really make an appearance; Kurt says that he’s going to let Elliot join his band. Sam goes and talks to Penny about the performance, turns out that Penny didn’t like the performance that much because of Lady Gaga being too dark, Sam thought that she was into the dark music; turns out that Penny didn’t like the dark stuff only her ex-boyfriends did. Sam and Penny end up liking the same type of music, he invites her to the Glee clubs Katy Perry performance, she agrees to it and they end up kissing. The Glee club give start to perform their Katy Perry performance, they’re singing Katy Perry’s Wide Awake.

Marley is looking through her locker; Jake invites Marley over for some Marley Poppins tonight. Marley is at Jakes house and their kissing on his bed, though it seems that Marley doesn’t want to have sex with him; she doesn’t want to feel pressured into doing so, they have a bit of a fight. Jake ends up asking one of the girls that he was helping with choreography to go somewhere private with him, she agrees and they go out to someplace private. Kurt is talking to his band; they’re trying to think of what to call their band. Rachel appears and it turns out that she didn’t have much of an idea. Rachel brings up that they should call their band Pamelansberry, Kurt instantly thinks it’s a good idea and asks Rachel to join the band, she’s a bit reluctant at first; but she then agrees.

Throat Explosion is beginning to get cocky, the Glee club are getting worried about the upcoming nationals, but Will isn’t fazed by it at all; if they win nationals while Throat Explosion is so cocky about themselves being so great, it’ll make the Glee club look much better when they win. Sue walks in and says that the Glee club is now suspended, due to the Glee club going against the dress code; Will isn’t happy hearing this at all and gets the Glee club to sing Katy Perry’s most recent song Roar. It then cuts to Kurt’s band also singing Roar by Katy Perry, and damn Adam Lambert’s intense vocals are insane. Marley shows up at the Glee club’s Katy Perry performance, she sees Jake and waves at him; but next to her shows up the girl he asked for some “private” time with earlier.