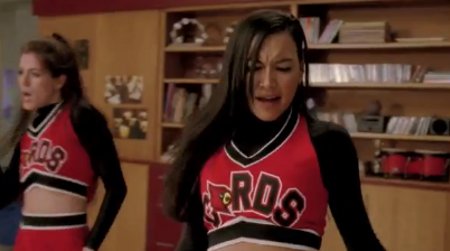 Glee season 4 is shaping out to be an awkward drama singing fest as always, but it’s an awkward drama singing fest that is entertaining. Sure it’s super cheezeballs at times, but who doesn’t love some good ol’ fashion high school cheeze? If you’re one of those super sensitive people who frowns at the first hint of spoilers, then you best duck, cover, and roll because there are a few that are coming in hot and spicy.

This next episode of Glee is entitled “Diva” and I think we can all be fairly certain as to what (and who) is going to make this episode live up to its name. When you hear the word diva associated with Glee, there’s one character who should immediately pop into your thoughts: Santana.

In Glee season 4 episode 13 “Diva,” Santana returns to rock Brittany’s world in light of all the Brittany/Sam drama that’s been sparking. She returns to the Glee club to make sure that Brittany is aware of the fact that she knows what’s been going on between her and Sam. But why should she care? They’re not technically in a relationship anymore, so is she just bitter and uber jealous? Oh my, do you think Sam should worry about Santana’s return — will her arrival jeapordize Sam’s shot with Brittany. Will Brittany fall in love with Santana all over again?

However the cards may fall, I think we should prepare ourselves to be seeing much more of Quinn and Santana. Some people you just can’t get rid of. Even though they tried to get a new cast, we just can’t seem to shake off the old one. But, hey, they keep it fun, right? Bring in the new. But keep some of the old.

In the spoiler clip below, Santana actress Naya Rivera is interviewed, as well as some of the other cast members — who say that Naya definitely belts it out and kills (in a good way) her reunion scene. Episode 13 airs this Thursday night, February 7th at 8pm central time on FOX.