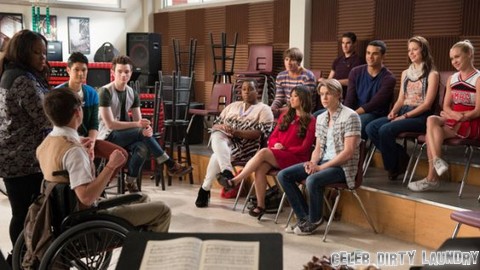 If you’ve been sucked into this season of Glee then you won’t want to miss the season finale as several story lines will come to an end and long awaited answers are right around the corner. Of course the New Directions are once again headed to Regionals with the hope of winning and then moving onto Nationals. Perhaps they are more determined than ever since last year they had to sit out the major competition. “All or Nothing” is the episode title and the gang knows that they have to leave everything on the stage if they want to have even the slightest hope of winning. The New Directions will perform three songs, including one written by newcomer, Marley.

Also in this great episode will be Rachel’s latest NYC adventure. She received a call back for a part in Funny Girl which is truly her dream role. Rachel has spent the entire season making some lousy choices and alienating people but Kurt and Santana have stood by her and are supporting her as she chases her dream.

The time may have finally come for Blaine and Kurt to not only reconcile, but to solidify their relationship. Blaine recently asked for Kurt’s fathers blessing and rumor has it that this episode could include a surprise wedding. Blaine is quite hopefully that he can get Sam to agree to be his best man too!

Rider spent a good chunk of this season being catfished by his dream girl. He bonded with this girl after messaging online and realized that her photo was a complete fake. He is dying to get to the bottom of things and knows that it’s someone close to him. When the school was on lock down he called the girl’s number and the phone rang from someone’s bag in the band room so he knows this person is right under his nose and he needs to get to the bottom of things once and for all.

Tune in for the shocking twists and turns that make up the season finale of Glee this Thursday covered LIVE right here on Celeb Dirty Laundry.