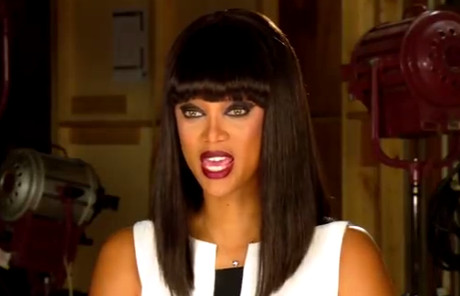 Glee will be returning this week with an all new episode entitled “Movin’ Out.” Tyra Banks will be guest starring on this episode and she’ll be playing a bitchy modeling agent known as Bichette, a stereotypical industry professional whom Tyra says she’s all too familiar with. “Had I known I’d one day be playing the type of characters who tormented me so much back in the day then I would’ve been so much stronger as a teenager.”

In the show, Sam (Chord Overstreet) will be hitting up the agency to try his hand at getting a modelling gig; hence Tyra’s appearance. Bichette will be giving Sam a couple of harsh criticisms, including the advice that he needs to lose ten pounds. Tyra, in her interview below, admits that saying harsh words like this were quite painful. “Never would I tell a model on America’s Next Top Model that they need to lose ten pounds.”

What do you think about Tyra’s look? Should be a fun week as our characters begin to explore their futures post-Glee Club. We hear that several characters will be booking it to NYC to see how their dreams might be able to fit in with that scene. Check out the supposed song list below, which features the music of Billy Joel.

“Movin’ Out” by Blaine and Sam

“My Life” by Jake

“An Innocent Man” by Ryder

“Just the Way You Are” by Rachel, Santana, Sam, and Klaine

Are you excited for this week’s episode? If you’re a GLEEK, give us your recent thoughts on this season in the comments section below.