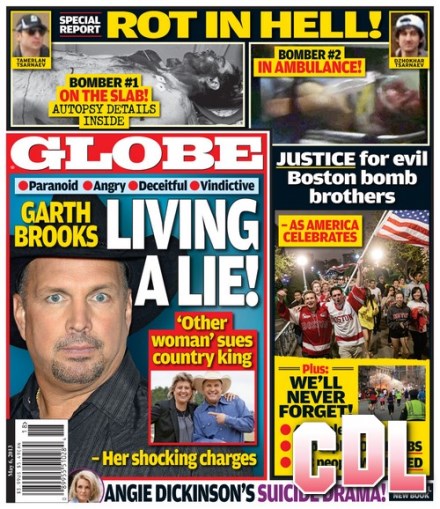 The bombing of the Boston Marathon last Monday has been at the center of everyone’s attention. We now know that Tamerlan and Dzhokar Tsarnaev, both Boston area residents are responsible for the two explosions that killed 3 and injured more than 250 people who were on hand to enjoy what is thought to be the biggest day in the city each year. Older brother, Tamerlan was killed in a shootout with police shortly after murdering an MIT officer in cold blood as he sat alone in his car.

The May 1st print edition of the GLOBE is giving its loyal readers an in depth look at everything that has transpired on the ground and in the air in Boston in the days that followed the bombing. They were there as Dzhokar was finally apprehended in a Watertown backyard while hiding beneath a tarp on a boat and GLOBE was on hand for the huge sense of relief and celebration that flooded the city streets as word broke that one suspect was dead and the other was in custody. While nothing will undo the damage and horrendous injuries that people will need to recover from there is a little bit of comfort in knowing that at least someone will be held accountable.

Last week we told you about Trisha Yearwood’s dramatic weight loss – 40 pounds in a few short months! Now it seems that perhaps her husband, Garth Brooks‘ other woman may have helped to light a fire beneath her. According to the May 1st print edition of GLOBE, Lisa Sanderson is seeking $425,000 from her former boss in unpaid bonus and salary, plus punitive damages. Sanderson worked for Brooks for nearly 20 years and considered him a “treasured family member”, at least until recently. Now Lisa claims that she is the latest in a long line of people that have been the subject of one of Brooks’ paranoid vendettas. I wonder if Trisha is also tired of these vendettas and the weight loss is in preparation for joining the dating scene again.

If you’re a fan of Hollywood then GLOBE is your obvious weekly stop for the latest on all of you favorite legendary faces. This week the magazine is featuring Angie Dickinson’s new book that dishes on many things including her suicide bombshell.

The May 1st print edition of GLOBE is on newstands now so grab your copy quickly. As usual the magazine is doing a stellar job of giving you your Hollywood fix on some of today’s hottest celebs. GLOBE goes right to the heart of the Boston Marathon Terrorist bombings since it truly has captivated the entire country for the past ten days. GLOBE has all angles covered this week and you really need to take a look for yourself!