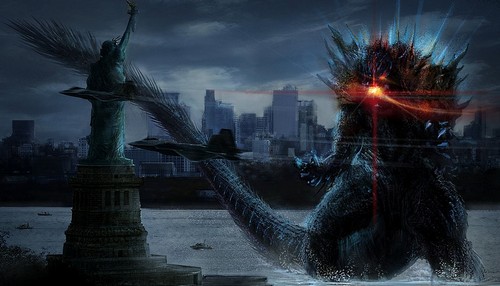 We’ve finally gotten our first real look at the Godzilla reboot, which is definitely, DEFINITELY a darker outlook on the story than the 1998 version starring Matthew Broderick. This version’s got a terrific cast, including Aaron Johnson, Elizabeth Olsen, Bryan Cranston, Sally Hawkins, Ken Watanabe, and Juliette Binoche. What is such a fantastic group of actors doing stuck in an unnecessary reboot? Well, the trailer might answer your questions.

When the idea of a Godzilla reboot was first starting to circulated, the big question was why? The Matthew Broderick version made boatloads of money, and although it isn’t necessarily beloved by the public or critics, it was a serviceable piece of entertainment. But even then, it was never as dark or groundbreaking as the original Godzilla story, and so the filmmakers really had an opportunity to delve into the true core of Godzilla.

However, judging from the film’s qualities on the first trailer is always difficult. We know the film is darker, both literally and figuratively. We hear a lot of screaming, and it seems more military-focused than the original film. In fact, the trailer gives us a bird’s eye view of Aaron Johnson’s character dropped onto Godzilla in the water from a helicopter in the sky, and it’ll definitely make for a thrilling sequence on-screen. We don’t see much from the rest of the cast just yet, although we do see Elizabeth Olsen looking scared and Bryan Cranston looking angry and/or possibly tearing up. Even though the visuals look spectacular, I’m just hoping the film doesn’t waste the excess of amazing actors it’s been given.

What do you guys think? Was the trailer strong enough to make you want to go see the film? Godzilla releases on May 16th, 2014.