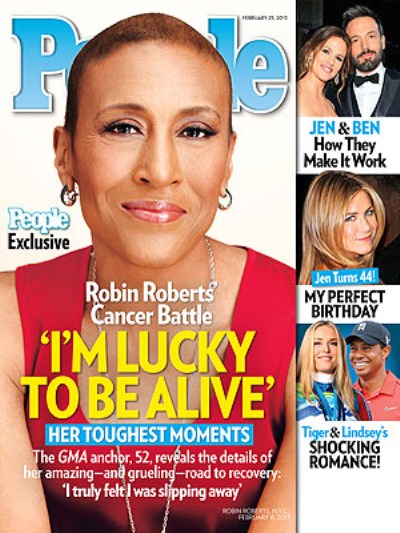 The current issue of People Magazine features the cover story, “Robin Roberts – Cancer Battle.”  Robin Roberts who is an anchor on ABC’s morning show Good Morning America was diagnosed with an early form of breast cancer in 2007. She underwent surgery and chemotherapy and radiation treatments.  In 2012 after surviving breast cancer Robin she was diagnosed with MDS – myelodysplastic syndrome and needed to have a bone marrow transplant.

Robin spoke in an exclusive interview to People Magazine about how there was a point after her Bone Marrow Replacement operation when she felt like she was dying.  She told the magazine, “I couldn’t eat or drink.  I couldn’t even get out of bed.  I was in a coma-like state. I truly felt I was slipping away … then I kept hearing my name.”

Five months after the operation Robin is starting to feel alive and she recounts her toughest moments to the magazine.   Robin feels lucky to be alive and is expected to return to Good Morning America, February 20th, 2013.

To read about Robin’s amazing and grueling road to recovery, pick up the current issue of People Magazine on newsstands Friday!