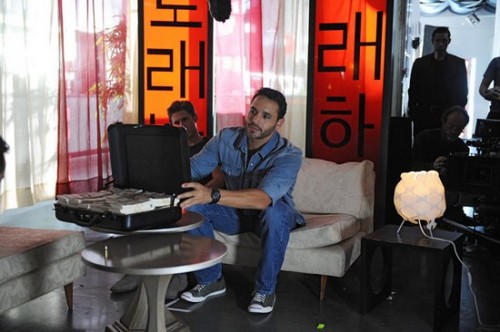 GRACELAND continues tonight on the USA Network with a new episode called, “Guadalajara Dog.”  On this week’s show Briggs and Mike tilt rival gangs against each other; Mike learns that undercover life has moral complications.  Did you watch last week’s season premiere?  We did and we recapped it here for you.

On last week’s show FBI rookie Mike Warren was assigned to Graceland, a beachfront mansion where agents from multiple law-enforcement groups worked and live. Mike learned the ropes with help from star agent Paul Briggs, who had a unique philosophy on the job and was fiercely protective of Graceland.

On tonight’s show Mike discovers that life undercover brings with it some moral question, as he and Briggs try to incite rival gangs to target each other.

I cannot wait for tonight’s episode 2 of Graceland last week’s series premiere was fantastic.  The show airs tonight on USA Network at 10PM EST and we will be covering it with all the details.  So make sure to bookmark this spot, and come back for our live coverage of Graceland Season 1 episode 2 right here.  Enjoy the show folks!  While you wait for the recap, check out the sneak peek of tonight’s episode below!

Briggs is showing Mike around the area. He’s trying to get Mike to ease up and relax when they run into Johnny. Jonny joins them and they continue on their little tour by going to a food stand. Unfortunately the food stand is robbed by violent little punk so Mike does his best to pursue the kid. Briggs and Johnny stop him. They tell him that they can’t be blowing their cover of every little thing. No matter what the rule book said.

Later, Mike continues on learning Spanish before he goes for a run. Returning home, he runs into the rest of the crew in the kitchen. Briggs rides Mike a little. Mike knows why and promises he would never be stupid to risk his cover again. Although when Johnny reads a statement from the bosses stating that Mike should become active; Briggs doesn’t appear comfortable with that. Briggs, after Mike out on the balcony, tells him he’s still too green. Mike tries to offer projects he could work on but Briggs shoots down the suggestions. Instead he just going to try and find a smaller case for Mike.

DJ is with the Rastafarians. The guys appear to be involved in animal smuggling. However the guys were on to him and they end up locking DJ in the back of truck. DJ is able to get out after calling for back up. Despite the embarrassment DJ does end up finding a case of highly effective bullets nicknamed the “cop killer”

Lauren is packing up her ex partner’s stuff. Briggs comes in and sees what she’s doing. He tries to convince her to let it go. She tells him she’ll take it under advisement.

Mike goes in for his psych evaluation. His doctor, Juan, asks him why did Mike request to work in D.C. Mike chose that location so he could eventually work his way up to Director. At first he was disappointed about the Graceland position. Then Juan begins questioning him about Briggs. Mike calls him out on not being an actual doctor but an interrogator. Juan tells him that if he helps with Briggs then he can get out of Graceland and go to D.C. with a fast track recommendation. Mike calls it blackmail, Juan calls it incentive.

Mike goes to Charlie for advice for Briggs. He wants on a case so Charlie tell him to be a self-starter. So he’s going to work an angle with one of the cases. In return for the advice Charlie wants him to go with her on a covert op. He’ll finally get to meet the other agent but first he needs to be decked out. They’re in their “costume” room, DJ comes in and can’t help but tell them about his big find. It’s impressive and it also gives Mike an idea.

Out at the club, Mike and Charlie are doing their best to play a couple. Even working some grab ass for added effect. He meets Paige in the bathroom. Paige is in the stall while Charlie crushes up some pills to put in a drink for Paige. She has to knock someone out.
Briggs and Johnny are at the house when Mike comes in with his idea to catch “Bello”. Briggs calls his idea risky so Mike tells him it’s a work in progress.

Paige returns to the house. She can’t wok a lead out of her mark. Luckily she was telling her woes to Briggs and he offered to use his contact to help her out. She leaves and Briggs goes to Mike and tells him they’re going to use his idea.

Mike goes to DJ asking for the bullets. He agrees to do DJ’s chores for two weeks for the whole case. Briggs and Mike are setting up the sting with the FBI task force. Jonny tells them that there won’t be an opportunity for the sharp shooters so essentially they’re on their own in there.

The meeting starts off easy. Bello’s guy tests out the bullets on two bears dressed as police. Bello’s men can’t maintain an aim though so they believe the ammo to be faulty. Mike tells them it’s because they can’t shoot. Minus a long and scary silence Mike is allowed to show them how to aim. His demonstration gets their approval.

Johnny can’t help making fun of Mike vs. the teddy bears. Everyone is laughing when Briggs asks Mike about psych session. Mike calls it the usually psychobabble but he will have to his “therapist” on a weekly basis.

Mike and Briggs make the final deal with Bello’s men. Mike asks him about a tracker only to find Briggs didn’t get on. As matter of fact he seems to be writing off the possible cop killers they just let loose. Briggs took him to a food stand and tells Mike to go and get the food. Mike tries to call his therapist when Briggs isn’t looking but can’t reach him. Returning to Briggs with food, he finds out that Briggs knows where Bello’s men are going. He ended up actually instigating a gang war between Bello’s men and Paige’s contacts.

Briggs and Mike go in to buy back the bullets when surprise, surprise, the police come in to make a bust. Mike wants to know why Briggs didn’t let him on the end game and Briggs tells him that it’s all about trust. Like for instance who he called back at the food truck. Mike claims he was checking his messages.

Mike and Briggs are supposedly out doing another job and yet the only person drawing a gun is Briggs. He wants to know who Mike has been talking to.