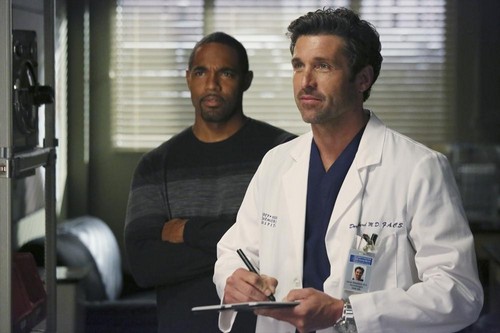 Tonight on ABC GREY’S ANATOMY continues with another new episode called “Thriller.”  On tonight’s show Halloween takes over Grey Sloan Memorial Hospital.  Did you watch last week’s episode?  We did and if you want to catch up we have a full and detailed recap, right here for you.

On last week’s episode Derek and Callie worked on a brain mapping project, Richard encouraged the interns to use his physical condition as a learning tool and after a discussion with Callie, Meredith considered continuing her mother’s research. Meanwhile, Shane continued to feel guilty about Heather’s death.

On tonight’s show it’s Halloween and the doctors of Grey Sloan Memorial are hit with a barrage of spooky patients, which affects their own plans and puts one doctor’s well-being in jeopardy.  Meanwhile, Derek collaborates with Ben on a new surgical technique, and Richard angers Bailey when he asks a second year resident to perform his next surgery, on a special Halloween episode.

Tonight’s episode looks like it is going to be a great episode and you won’t want to miss it, so be sure to tune in for our live coverage of ABC’s “Grey’s Anatomy” Season 10 episode 7 at 9 PM EST! While you wait for our recap hit the comments and let us know how excited you are about the season premiere.  Check out the sneak peek of tonight’s episode below!

On tonight’s episode things went off in a rocky start. Leah doesn’t want to appear needy and in order to do that she sticks to Arizona’s policy of no strings attached… a bit severely. It seems accidentally falling asleep at Arizona made her fear she broke the rules so she fled the scene even as Arizona, naked and in bed, tells her it’s ok to stay.

Arizona would have needed the distraction Leah could have provided. She and Callie immediately got into an argument at work over who was taking their daughter trick or treating. Arizona won if you cal Callie giving up a fair fight.

Leah on the other hand had her day turn into a horror movie. A patient comes into the hospital along with his victims. It seems he thought he was a zombie and started mauling pedestrians. While being treated in the ear he attacked Leah. Took a bite right of her shoulder. She tells everyone she’s fine but Bailey won’t allow her to play it off. Especially when Richard’s surgery is on the table. The residents were given the treat of one of them getting chosen to operate on Richard for his surgery but Bailey hadn’t like the idea to begin with. She’s been watching over Richard like a hawk to the point when Ben shows up for the holiday she’s not at all interested in celebrating with him. Good news for her, now Leah is out of the running.

And so is Stephanie. She recently had Lasik surgery and had run into a door. Technically, Richard discounted the moment he heard about the door incident. Although that hasn’t stopped her looking at patients. Her new patient came in for an untreated bug bite nearly 4 months ago. The wound has maggots living inside of it. The case is so interesting that Meredith and Callie have removed her form the case. She was a liability. She has to go pickup candy for their kids when they stop by the house later tonight.

The case is interesting. The woman has an overwhelming fear of doctors and doesn’t want anyone to come near except for her son. Usually Meredith would relish getting Christina’s opinion but things are still bad between them. Like how Meredith didn’t invite to the trick or treat for her kids. Yeah, Christina isn’t that big on kids but she loves Meredith’s kids. Meredith invites her afterwards yet Christina is unsure on whether her former best friend really meant it.

At least she has Owen is a strange way. They bonded over an unusual surgery. However she doesn’t know his girlfriend dumped him. She hadn’t liked that Owen never mentioned he was married and figured he needs more time alone first before he’s ready for a relationship.

Speaking of relationships; Jo and Alex are into the no talking zone. He prefers to bark directions at her at work and ignore her at home. This leads them to a problem. Their non-communication makes them not realize what’s wrong with their patient until the kid is in real danger. She couldn’t get scared because it might kill her. When no one was looking she wen trick or treating in the hospital and unfortunately she finds Heather’s patient. An elderly homeless woman that just so happens to look like a witch cross with a ghoul.

The patient had come in looking for Heather and found Shane. He can’t tell her Heather died but unless he does she won’t admit to her name or allow anyone else to treat her. She also refuses to stay still. She’s constantly roaming around the halls.

They found the little girl passed out on the floor. Luckily she was treated in time. Her father has yet to recover though. He was devastated. Alex was pretty harsh with him for letting he girl leave her hospital bed. Jo reassures him he’s a good dad and she speaks to Meredith about Alex.

Meredith has to find the person that will do Richard’s surgery. Richard threw bailey off the case for being too emotional. Meredith didn’t want but when he apologized for being suicidal earlier she knew she had to. She picked Shane but he wants to stay and treat Heather’s patient. He did tell her about Heather and he told her he’ll be her doctor now.

In the end there was only one resident left. Meredith went with Jo. During their surgery Jo tried to get Meredith’s opinion and got shut down. Meredith doesn’t have time to fix a broken Alex and gave her advice instead. Meredith said to give Alex time. Even when he’s pushing her away that’s when he needs her the most.

Leah freaked out about getting tested. Thankfully she had Arizona there to calm her down and anyway the test came back negative.

Christina did go to the trick or treat thing for Meredith but didn’t stay nor did she let Meredith know she was there. Meredith only found out when she spotted the cupcakes she asked Christina to drop off.

Ben quit his job and then told Bailey after the fact. Did e really think that was smart?