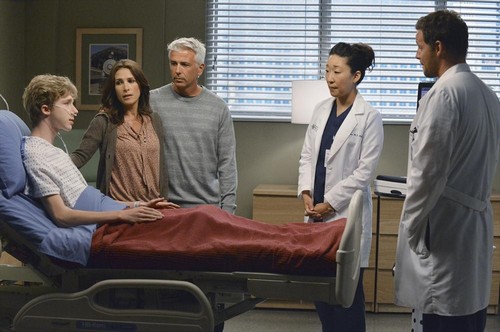 Tonight on ABC GREY’S ANATOMY continues with another new episode called “Everybody’s Crying Mercy.”  On tonight’s show Callie continues to shut out Arizona.  Did you watch last season ten premiere?  We did and if you want to catch up we have a full and detailed recap, right here for you.

On last week’s episode GA returned for its monumental tenth season with a two-hour event, the Grey Sloan Memorial Hospital doctors were faced with the devastation left by the storm. A giant mudslide in Seattle injured a group of first responders and citizens, causing the already shorthanded ER to spring into action. Meanwhile, Meredith was faced with a tough decision that will affect the life of a loved one, Callie was rocked by the reality of Arizona’s infidelity, and Richard’s life was in extreme danger.  The fight continued to save those affected by the storm, Callie made a bold decision regarding her relationship, and the doctors came together upon receiving devastating news.

On tonight’s show Meredith and Derek adjust to life at home with a newborn but find it difficulty being away from the hospital; Arizona tries to takes steps to fix her broken marriage; Alex and Jo navigate through their new relationship; and Owen clashes with Jackson over financial issues at the hospital. Meanwhile, April anxiously awaits her boards results.

Tonight’s episode looks like it is going to be a great episode and you won’t want to miss it, so be sure to tune in for our live coverage of ABC’s “Grey’s Anatomy” Season 10 premiere at 9 PM EST! While you wait for our recap hit the comments and let us know how excited you are about the season premiere.  Check out the sneak peek of tonight’s episode below!

The hospital is frantic. They had close off one wing because of damage from the storm. Owen wants the Board members to do something and ll he gets is that they’re busy or bacially out of commission. Arizona says right now what they need is doctors but Owen says they need both. Something she would figure out the moment she stopped hiding from her wife and acted like an adult.

What’s up with the new haircut and wearing a sexy dress to work anyway. That’s not going to win back Callie. Callie found a place for herself. She’s a makeshift nanny to Meredith and Derek. They don’t want to lose her and she still pretty much running on angry. That all equals no reunion.

Meredith is relying on a lot of people to help her out. She can’t be at the hospital so she has Bailey checking in on Webber. However that’s not working. Bailey doesn’t want Richard to get mad at her so she’s making him decide on what is best which in all honesty isn’t. Shane is also on the case and he has to make sneak calls to Meredith in order to tell her what’s really going on.

Shane will run himself ragged. It’s not as if he’s been getting a peaceful night sleep. He, Jo, Stephanie, and Leah were staying up all night drinking beer and eating pizza. Jo was hiding from Alex. He hadn’t made a move on her and so they’re just being awkward.

What’s really awkward is a patient’s last minute request. A woman had come in with her husband and because she was blacking out and confusing thata with death she asked Leah and April to deliver a message to her husband. She wanted him to know she slept with his brother. The same brother that popped up in the waiting room to supposedly support the husband through this terrible time. Leah doesn’t know what to do and April can’t help.

She’s waitinf from the boards on her test results. If she fails this time then the first time propbably wasn’t Avery’s fault. Finally someone gets good new. Now if only the rest of his day would go the same way for Avery. He has a pro-bono case that Owen forces him to give up. They can’t afford to take those kind of cases until the hospital wing get fixed. Don’t like it then call a Board meeting.

Shane remains on Richard Watch. He knows Richard is losing to much weight but Bailey refuses to go against the man she not only saved but also insulted. Guess the guilt from calling him a drunk finally caught up with her.

Leah and April are operating on their patient when they were given specific directions not to cut her. Callie will do that and yet when she was late to the scene April went against direct orders. Callie gets upset and then somehow confuses April situation with Arizona’s. If anyone needed to leave the OR then it should have been Callie.

The patient ended up dying anyway. No through negligence. It was an unfortunate stroke. Lea asks what does she tell the husband and April wants her to bury the truth. She feels the husband is already getting enough bad new but Callie is going to makes sure Leah delivers message. She says it was the patient’s last wish and it also be Callie’s wish to expose a “cheater”. Doesn’t really matter; Leah has to deliver message.

Callie must have realized how inappropriate that was. When the time came she cuts off Leah with a message that his wife wanted him to know she loved him.

The new parents need sleep. Derek fell asleep in the parking lot and Meredith fell asleep moments before entering the shower. They are dead tired. When Derek falls asleep, Meredith takes the baby to the hospital. Shane who was caught acting on Meredith was given a set down. With Meredith here then hopefully something can get done. Or not. Meredith wanted to recheck everything instead of making a decision. As Meredith and Bailey got to talk to doctors, Shane takes the opportunity to confront Richard. He tells him he can either accept the tube or make Meredith have to force it on him. Richard takes the tube.

The ladies are angry Shane did it without them and he’s completely unapologetic. Richard was dying in front of them and they kept rechecking the results. At least Richard accepted and everyone get a happy ending.

April got one too. She passed the Boards.

Owen and Aver force a surprise board meeting. His ex-wife can’t touch him anymore. The best they can do is listening to him. For no other reason than sympathy. The result is that Owen has come up with throwing a party to invite large donors. They might as well think of another way to utilize the down wing while they have the advantage of starting over.

Richard got the chance to talk to Meredith and what he says shocks her. He says he chose the wrong person to make choices. He wanted someone to be emotionless when they pulled the plug. Richard has a death wish