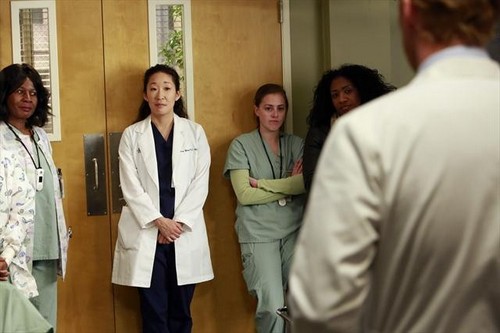 Tonight on ABC is an all new episode of GREY’S ANATOMY. Tonight’s show is called “Hard Bargain” and on tonight’s show the financial distress of Seattle Grace weights on the employees. If you missed last week’s episode we have a full and detailed recap here for you.

On last week’s show competition heats up as several of the doctors fight to become the new face of Seattle Grace; April brought in an emergency case, and Jackson and Alex worked with a transgender teen couple. Meanwhile, the hospital implemented new policies which test the patience of the staff.

On tonight’s show as the hospital spirals closer to financial ruin, Owen must make some tough decisions, which includes foregoing an expensive surgery that could save the life of a child. Meanwhile, Alex and Jo work together to save the life of an infant, and April asks Jackson for dating advice.

Tonight’s episode looks like it is going to be a great episode and you won’t want to miss it, so be sure to tune in for our live coverage of ABC’s “Grey’s Anatomy” Season 9 episode 15 at 9 PM EST! While you wait for our recap hit the comments and let us know what you think of Grey’s Anatomy season 9, so far? Check out the sneak peek of tonight’s episode below!

Callie is discussing with the crew about possibly leaving Grey’s anatomy. She wants them to buy the hospital while Christina is having sex with Owen.  Arizona just wants to take it easy. Derek thinks Callie is being naïve in that they can just run the hospital any way they fit. Derek says that they don’t have enough money to buy the hospital. Arizona is not ready to bankrupt them but Callie does not want to leave; she is proud to be a part of the hospital and it’s worth fighting for. Derek says they can stay and make the place better. Arizona says that they are not spending the money; their daughter deserves better than to live with a question over her head. Arizona thinks Derek feels guilty. Arizona says that some people died and got money; she thinks he feels guilty because he got the money, got his hand back and now wants to be the hero but it is impacting her family.

Arizona tries to apologize to Derek. She says she was stressed out and out of line when she called him egotistical. Richard judges Derek’s billboard and say that it’s a lot of work. Derek says t hat he only agreed to a brochure. Owen tells Derek that it means a lot that Derek is fighting this battle with him.

Matthew says that he wants to take April out on a date. He can’t wait to see her out of her clothes and in regular clothes. He says if he’s late it’s because he’s still banging his head into a wall over how their exchange just went.

Owen tells a disappointed Miranda that her proposal was turned down.

Christina laughs at the idea of using their winnings to buy the hospital. Christina thinks it’s stupid. Christina tells Meredith to stop talking nonsense and have Owen’s back since he is killing himself to keep the hospital open.

April tells Jackson that she’s been seeing Matthew after some initial awkwardness. April says that she really likes him and that it’s all going to end tonight. April knows it’s probably too much. Jackson says Matthew won’t care if she’s a virgin but he’ll probably think she has a mental problem. He says he was just joking but she leaves.

Two of the interns tell Christina that they are thinking of leaving. Stephanie says she only has 5 years to get as good as she can and she can’t waste another minute.

The nurse is in an uproar over the changes. Miranda is also incensed because her genetics proposal was shut down. Owen angrily tells her that he is the one that shot down the idea. Derek is a bit disgusted and proceeds to make a phone call, informing the person that he has a crazy idea.

Callie is the one who Derek called. She is ambushed by his financial advisor who says that physicians can’t own the hospital under the law but there is a loophole by becoming a board of directors. But he needs to see a financial statement first which they can only get from Owen but they have to go behind his back. Christina says they want them to lie to Owen.

Owen speaks from the heart and asks the nurses to stay, help him get through this difficult spot.  They say they can try.

Alex and Jo deal with a one night stand who are now expecting a child. They want nothing to do with each other but both care about the child. She has been hospitalized because there is an issue with her liver and needs to operated but it may put the risk the baby. She decides to wait. She wants a glass of water and a maxi pad for her child’s father.

Christina asks Owen if he meant what he said. Owen says no because it’s all on him since he put them all on that plane.

Derek and Meredith create a diversion in order to take a look at the financial records for the hospital. Miranda tells a patient to leave Settle Grace and go someplace else fast for medical care.

Arizona is upset that Miranda did what she did. Miranda says she has to make herself smaller in order to work at Seattle Grace. She doesn’t want to work there anymore and wants to leave before she doesn’t recognize herself.

Jackson tells April that if Matthew doesn’t get it, he doesn’t deserve her. Jackson says that once Matthew knows April better, he’ll want to follow her anywhere.

Arizona tells Callie, Derek and Meredith that Miranda is quitting—they need to make a move soon. Arizona is in. Christina says that Owen got notice that the buy might go down tonight.

At the board meeting for the sale of the hospital, Arizona, Derek, Callie and Meredith quit. Christina quits too.

It turns out that Derek had Shane do the graffiti on the billboard. Richard wants to know what’s going on. Derek says he’ll know soon enough. Christina wants to tell Owen everything. Meredith says not yet because she’s not sure he’ll understand. Christina isn’t so sure.

April and Matthew are making out but stop. Matthew tells April that he is saving himself for marriage. Matthew knows it’s not something she hears everyday but it’s something he believes in. April says she’s saving herself too. However, she doesn’t tell him that she technically isn’t a virgin.

The offer to buy the hospital has been withdrawn; the doctors quitting brought down the value.

The one night’s stand couple survives surgery.  Alex is jealous to see Jo into another guy.