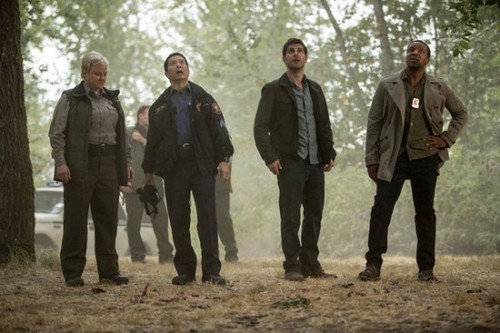 Episode 3 of GRIMM called,  “A Dish Best Served Cold” opens with Nick getting a physical, the Doctor has him running on a treadmill. The Doctor is baffled as to how Nick is in such incredible shape, no matter how fast he turned the treadmill up, his heart rate never wavered.

Rosalee is on a date with Monroe. He is trying to convince Rosalee to move in with him. Convincing her isn’t that difficult, Rosalee wants to move in with him. A couple, Sam and Kimber interrupt their romantic dinner.A man is staggering through a forest and it looks like he is transforming into some sort of creature.

Nick and Juliette are discussing his physical. They are concerned that he may still be a zombie and that is why he is in such amazing shape.

Nick and Hank just got a call to investigate a dead body in a tree. It is the body of the man that was staggering through the woods, something exploded inside of his stomach.

Nick and Hank are questioning the victim’s girlfriend. She is distraught over his death, she has no idea what happened to him.  Two kids discover another bloody body in a tree in a park, it appears to be a female.

Nick is sitting at his desk looking at photos of the man that he killed, Mitchell Zinc, in the bar fight when he was a zombie, obviously feeling some remorse. Nick tries to talk to his Captain about the man’s death, but his Captain shows no sympathy.

Hank and Nick head to the park to investigate the newest bloody body hanging in a tree. They find the victims’ purse and a receipt for a restaurant called Raven And Rose. They put two and two together and realize the other victim they found in a tree also ate dinner at the Raven And Rose.

In Austria a man is breaking into a house, he calls Sebastian and says he can’t find “Frau Peche.” He does find an address written on a piece of paper, Sebastian tells him to check it out.

Nick and Hank pay Raven And Rose a visit. They hide around the corner and watch the head chef and his entire cooking staff transform into creepy pigs. Nick realizes the entire restaurant is ran by Bauerschwine. They keep their cool and act like they didn’t just see the chef grow a pig nose, and question him about the victims. The pig chef says he has no idea what could have happened to the victims and cooperates completely with their investigation.

Nick goes to Monroe’s to get the rest of his stuff, and is surprised by a going away party from his roommates. Monroe gets a phone call from his friend Kimber, she can’t seem to locate her husband Sam (the couple that were at the restaurant when Monroe and Rosalee were eating).

With the help of Monroe’s Blutbad knowledge they put two and two together and realize that all of the victims they are finding in trees are Blutbads, the Bauerschwine’s rivals. Hank heads out to put a missing person’s report on Sam. Nick is concerned that Monroe (who is a Blutbad) will suffer the same fate as the previous victims.

Rosalee does some research and realizes that the chef is serving everyone at the restaurant a complimentary beef truffle with a deadly mushroom in it. The mushroom is only deadly to Blutbads though, and it is causing their intestines to explode. Monroe is relieved because he remembers he didn’t eat the truffle because it had meat in it.

Hank, Monroe, and Nick find Sam in a tree. They are too late though, his stomach explodes and he dies, before they can save him. Monroe is furious, he wants to avenge his friends and take down the Bauerschwine chef.

Nick goes back to Ravens And Rose and lets the Chef know that he is on to him. The Chef realizes he is a Grimm, Nick wants him to go to court and confess to what he has done. But, the Chef reminds him that he hasn’t broken any laws. It is not illegal to serve mushrooms at his restaurant.

Nick and Juliette are discussing what actions Nick should take against the Chef. He tells Juliette he is going to have to kill the Chef.  Monroe is having a meltdown and Rosalee is trying to comfort him. He wants to go kill the Chef. Nick arrives and tries to talk some sense into him. Monroe storms out, determined to avenge his innocent friends.

Monroe is following the Bauerschwine Chef down a dark street, waiting to make his move. Before Monroe is able to kill the Chef, Nick and Hank arrive. Nick is torn. As a cop he has to protect the Chef. Nick shoots Monroe. Dozens of Blutbads surround Hank, Nick, and the Chef. Nick refuses to save the Chef from the Blutbads until he confesses to murdering them at his restaurant. The Chef is under pressure and confesses to the murders and agrees to sign a statement.

After the Chef has signed the paperwork, it is revealed that Nick, Monroe, and Hank staged the entire thing to get a confession out of the Chef. Monroe is alive and well, and satisfied that the Bauerschwine Chef is paying for his friends’ deaths.

On next week’s episode it is going to be intense when Nick and Hank investigate a drowning death with mysterious marks on the victim’s ankles, they will happen upon a group of water-bound Wesen with a deadly postcoital cuddle. In the meantime, Rosalee will start unpacking her things at Monroe’s, and Captain Renard is going to make a startling realization about the possible identities of the Royal Baby’s parents.