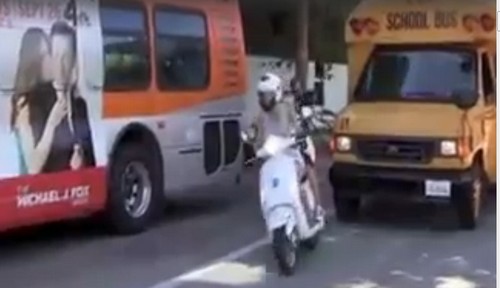 There was a video that went viral a couple months back, showing Gwyneth Paltrow picking up her daughter Apple [Martin] from her school. We already know Gwyneth thinks very highly of herself, and that was once again proven when she put the lives of a bunch of schoolchildren in danger because she didn’t want to wait five minutes. The video shows her and Apple on her Vespa, cutting off a school bus and avoiding an accident by mere seconds. Thankfully, the driver of the bus saw Gwyneth at the last minute and stopped, but Gwyneth basically put the lives of her own daughter and several children at risk because she’s selfish and entitled.

Anyway, since Gwyneth doesn’t care about what the Internet was saying and the bus driver was probably too scared to speak out against her, she didn’t have to face much of the consequences – until now. The school’s administration must have seen the video, because they have implemented a new rule stating that Vespas will no longer be allowed for pick-up and drop-off at the school. HA. Take that, Gwyneth.

Of course, this latest incident has just aggravated Gwyneth’s perceived ‘image problem‘ in the industry. A source tells Radar Online, “There is major pressure on Gwyneth right now to do something big and turn the tide of heavily negative publicity… She has to fix this problem before she commits to more work. There is a significant image problem at work and Gwyneth doesn’t want to have another baby to fix it.”

Isn’t it sad that the source mentions the baby thing? It’s true though – all celebrities, not just actresses, find that their PR problems get significantly better after having babies. It appeals them to the tabloid-reading demographic, which in turns spreads to the public. And if Gwyneth doesn’t want to do that, then she needs to stop acting like the queen of the universe and learn to live by the normal people rules of life – which includes not cutting off a school bus while picking up your children from school.