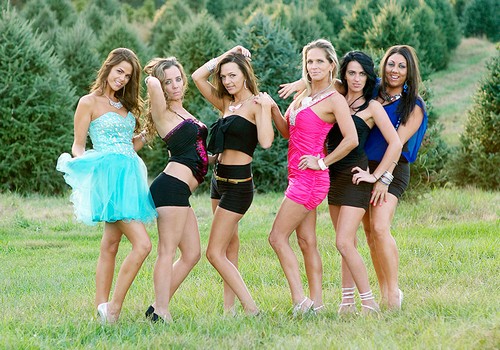 Tonight on TLC GYPSY SISTERS continues with a brand new episode.  On tonight’s show called, “A Newborn King.” Mellie goes into labor and Nettie sends Kayla a DVD to plead for forgiveness.

If you have not watched the show before life with the Stanleys, a Gypsy family in West Virginia, is chronicled in this reality series.  In season 2, Wild child Mellie Stanley, best known for her stripping and violent temper on My Big Fat American Gypsy Wedding, returns with her meddling sister Nettie, cousin Kayla, and loveable Laura for a raucous look at life as a gypsy in the wilds of West Virginia.  Martinsburg, West Virginia is a hotbed of gypsy culture and intrigue. With their husbands constantly on the road for work, the women are expected to stay home, cook, clean and raise the children. When they’re not busy doing household chores and adding bling to outfits, they keep themselves entertained by trading in their favorite commodity: gossip!

On tonight’s show after countless false alarms, Mellie finally goes into labor. As a last ditch effort, a remorseful Nettie decides to send Kayla a DVD, pleading for forgiveness. Later, Annie and Sheena help Kayla prepare for the chili cook off.

Tonight’s episode is going to be another drama packed one, which you won’t want to miss. So be sure to tune in for our live coverage of TLC′s Gypsy Sisters Season 2 Episode 5 at 9PM EST! While you wait for our recap, hit the comments and let us know how excited you are about the new episode of Gypsy Sisters tonight.

Tonight’s episode of Gypsy Sisters opens with Mellie in the hospital, she has gone in to labor. She just received an epidural. She tried to call her sisters Nettie and JoAnn, but neither of them are answering their phones. She is scared that she is going to have her baby all by herself. After a few hours her sisters start showing up. She doesn’t want her baby’s father Robbie to come to the hospital though, he hasn’t been by her side during her rough pregnancy, she doesn’t need him to show up now.

After a few hours of intense labor, Mellie gives birth to her baby boy, Richard. She is a little taken aback by the fact that he looks nothing like her, he looks like a clone of his father Robbie.

Mellie’s whole family comes to meet baby Richard. Even her mother Lottie Mae paid her and her new son a visit.

The next day Mellie’s cousin Kayla pays her a visit at the hospital. Kayla and Nettie don’t get along and Kayla refuses to come if Nettie is there, so Mellie asks Nettie to leave for a little while. Nettie agrees and heads out of the hospital.

Kayla arrives in Mellie’s hospital room and meets Richard, AKA “Fat Bastard.” Kayla is proud of her cousin, and thinks that Richard’s arrival will turn Mellie around and she’ll stop “runnin wild.”

JoAnn and Nettie head back to Nettie’s house to get Mellie and Richard’s room ready. Mellie is going to live at Nettie’s until she can take care of baby Richard on her own. Nettie confesses to JoAnn that she was hurt she has to leave the hospital so Kayla could visit. She has tried to talk to Kayla numerous times and Kayla won’t give her the time of day or accept her apology.

Nettie heads back to the hospital and brings Mellie a gift from Sandra the “Gypsy Bling Queen.” She made baby Richard a blinged out car-seat, pacifier and matching outfits that say “Little Dick” on them.

Meanwhile Kayla and Sheena are tasting chili recipes for the cooking contest Kayla was entered into. The mail comes, and Kayla is shocked to see that Nettie sent her a package. Inside the package is a DVD that has “watch me” written on it. Kayla puts the DVD aside, so she can watch it when she is alone, she needs to focus on her chili for the cook-off tomorrow.

The next day Kayla and her family head off to the chili cook-off. She has to make the chili at the cook-off, and there are several rules (no cheese, no chunks, etc). It’s time for the judges to announce the winner. Kayla is convinced she won. But, she didn’t. Her chili wasn’t even in the top ten.

Mellie and Baby Richard are headed home from the hospital. Mellie is extremely paranoid about leaving the hospital, she is scared she is going to be a bad mother. She is sharing a room with her sister JoAnn though, and she will help her care for him for a few weeks.

After the chili cook-off Kayla heads home and watches the DVD from Nettie. Nettie apologizes profusely for fighting her and all of the horrible things she said. On the DVD Nettie begs for Kayla’s forgiveness. Kayla is moved by the DVD and is considering forgiving her.