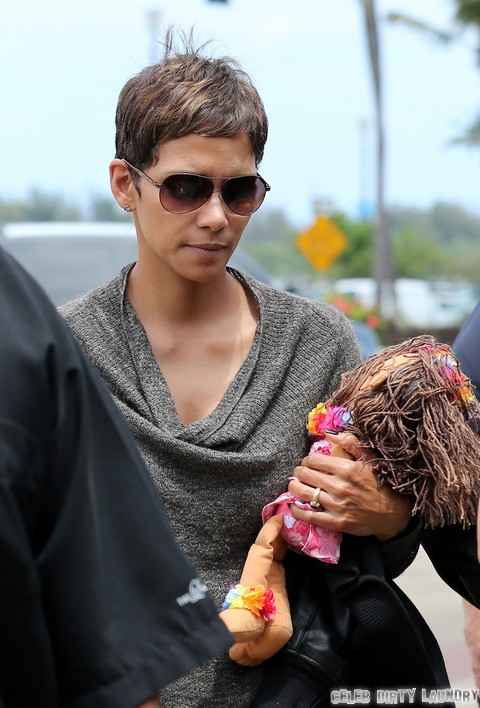 Halle Berry’s pregnancy has been dominating the news the last couple of days.  As a 46 year old woman, Berry assumed that she was way past the age where she could get pregnant, and it ended up being as much of a surprise to her as it was for the rest of the public who heard the news.

However, let’s be real here – it’s Halle Berry. Nothing about her is normal for a 46 year old woman. For starters, women that age don’t look like her nor have a body like hers. Thus, when she says that she had absolutely ‘no idea’ she would get pregnant, it’s hard to believe her.

Halle just had her first child 5 years ago – so not that long ago. Halle had Nahla with her ex-boyfriend Gabriel Aubry, and sure he was much younger than her, but she was still into her 40s when she gave birth to Nahla. While that’s not a common occurrence, it’s been happening more and more lately.

So when Halle spoke of the pregnancy to CNN and said, “This has been the biggest surprise of my life, to tell you the truth. I thought I was kind of past the point where this could be a reality for me. So it’s been a big surprise and the most wonderful.”

So what? She just didn’t use birth control for the past five years, and it somehow ended up being a surprise that she got pregnant again? If she came straight out and she admitted that she wanted another baby, it would be a lot easier to buy than this. After all, she pretty much admitted that Nahla was begging for a sibling, and she herself had thoughts about it in the past. So why not come clean?

Sure, it could genuinely be a surprise. Somehow, after following her recent endeavors with the press, it seems more calculated than that. It’s also an interview with CNN – the news outlet that you talk to when you want to be taken seriously. A pregnancy shouldn’t merit that much attention, should it? Even if it’s from an A-list actress. Even Angie and Brad don’t talk to CNN when they’re adopting/expecting another child. Just something to think about.