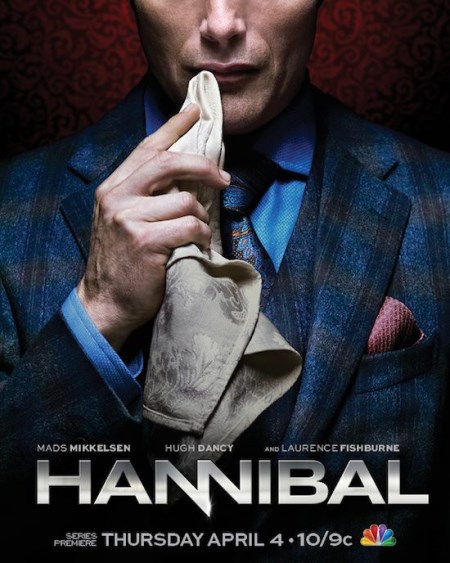 Tonight on a NBC an all new episode of HANNIBAL airs with, “Entree” Hannibal Lecter is back! This brand new series is written by Thomas Harris and promises to deliver.

On Last week’s episode called “Coquilles” a murdered couple was found in a motel room and they were made to look like angels strung from the ceiling. Graham thinks the killer is transforming the victims into angels just for him. In the end, the killer is found at an old farm and commits suicide transforming himself into an angel as well.

Will Graham is played by Hugh Dancy and Dr. Hannibal Lecter played by Maks Mikkelsen, a forensic  psychiatrist. Laurence Fishburne also appears on the show as Special Agent Jack Crawford.

On tonight’s show a nurse for the Criminally Insane is murdered and it is a patient who did it. Dr. Gideon starts taking credit for the Chesapeake Ripper murders from two years ago. Graham is determined to find out if Gideon is really truly the Ripper. Bloom and Crawford strike up a deal to write a story about Gideon. Tonight we will find out who the Chesapeake Ripper is, you won’t want to miss this riveting episode.

Tonight’s episode looks like it is going to be great, so be sure to tune in for our live coverage of NBC’s new series at 10:00 PM EST! While you wait for our recap hit the comments and let us know how excited you are for this new series.