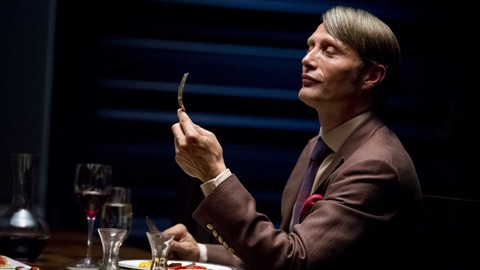 Tonight on a NBC an all new episode of HANNIBAL airs called, “Fromage”. This new series that is written by Thomas Harris continues to deliver. On Last week’s episode called “Sorbet” the BAU investigated a body found in a bathtub with it’s kidney removed and Graham had to figure out if this was the work of the Chesapeake Ripper or someone else. Meanwhile, Crawford was completely haunted by the discovery of Miriam Lass’s severed arm and just couldn’t get over it. A medical examiner met his maker after he was once rude to Lecter; he got his heart removed, but that wasn’t enough for Lecter’s dinner party. So, he found himself four more victims to harvest their organs. If you missed any of this episode, you can read our full and detailed recap HERE.

Hannibal is a solid offering that keeps viewers guessing and tensions simmering from week to week. If you have been watching, I am sure like me, the episodes stay with you for days.

On tonight’s episode called “Fromage”, Lecter’s patient, Franklin, is very worried about his friend Tobias who he thinks just may be a psychopath, guess what, Franklin is right! Graham’s mental stability worsens tonight as he begins to hallucinate about animals in pain and his feelings towards Alanna Bloom are rejected. Lecter does a lot of killing tonight, even his patient Franklin is not safe. Lecter shares his feelings about Will to his therapist and we will find out tonight exactly what they are.