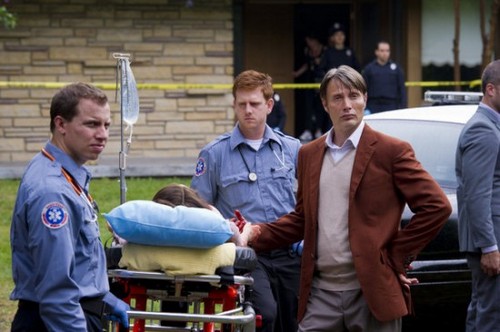 Tonight on a NBC a new series HANNIBAL airs with a new episode called, “Apertif.” Hannibal Lecter is back! This brand new series is written by Thomas Harris and promises to deliver. The American thriller is scheduled for 13 episodes with the first one tonight.This new Hannibal is a twist on the Lecter-Graham relationship and it’s entirely new. It would appear that the two have been acquainted for quite some time with Lecter having advised Graham on a number of cases before he figured that Lecter was a serial-killing cannibal.

On tonight’s show when the FBI takes on a case of disappearing college girls, Jack Crawford (Laurence Fishburne) recruits Will Graham (Hugh Dancy), a gifted criminal profiler with a unique view into the psyche of serial killers, to consult. Jack also seeks the help of Dr. Hannibal Lecter (Mads Mikkelsen), a brilliant psychiatrist, who, unbeknownst to him, is not only one of the most successful serial killers of all time, but also a cannibal. After a copycat strikes,

Tonight’s episode looks like it is going to be great and you won’t want to miss it, so be sure to tune in for our live coverage HERE of NBC’s new series at 10:00 PM EST! While you wait for our recap hit the comments and let us know how excited you are for this new series.