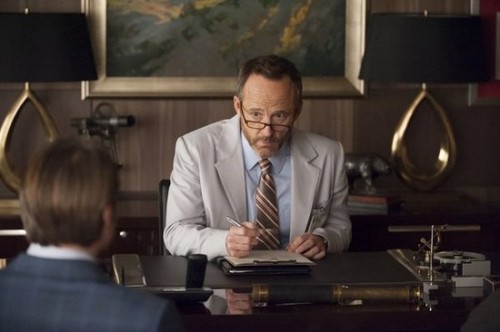 Tonight on NBC HANNIBAL continues with an all new episode called, “Buffet Froid.”  On tonight’s show the team doubts Will who says, while revisiting the crime scene alone, he saw a mysterious, “dead-looking” woman (Ellen Muth) who may be involved.  Did you watch last week’s show?  We did and we recapped it here for you!

On last week’s show a serial killer left his trophy on the beach, it was a totem pole of dead bodies. The BAU team was on this killer’s trail that first digs up his victims. Nick Boyle’s body was found and Abigail got questioned about it. Meanwhile, Lecter convinced Will to keep some secrets. Abigail revealed her biggest secret to Lecter while penning a book with Freddy Lounds.

On tonight’s show BAU investigates a murder in which two victims’ faces are similarly mutilated; given a “Glasgow Smile.” For the first time, Will (Hugh Dancy) contaminates a crime scene thinking he committed the first murder and an MRI shows he suffers from Advanced Encephalitis. But Hannibal (Mads Mikkelsen) intimidates the attending physician, Dr. Sutcliffe, (John Benjamin Hickey into telling Will he’s okay. Meanwhile, the team doubts Will who says, while revisiting the crime scene alone, he saw a mysterious, “dead-looking” woman (Ellen Muth) who may be involved. With his fears fed by Hannibal, Will returns to Dr. Sutcliffe for more mental health tests, when the doctor is murdered.