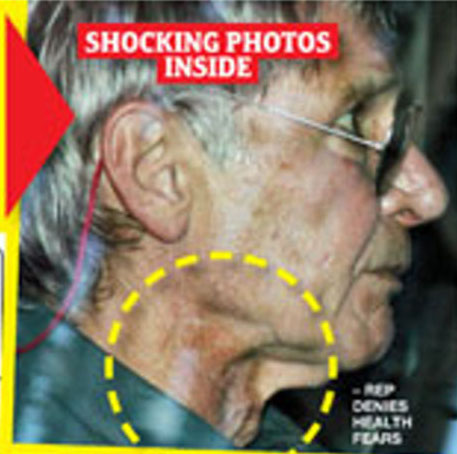 Fans of Harrison Ford may have noticed that he’s not exactly looking like himself these days and it’s not just because of the fact that he shaved his head for the new film that he’s promoting, Paranoia. The 72-year old actor has been photographed out and about with red patches on his face and neck that can be indicative of a battle with skin cancer. If you remember late last year the actor seemed to have a battle with basal cell carcinoma that manifested itself as a growth on his nose.

Now, according to the Sept. 2nd print edition of National Enquirer Harrison has once again been spotted with weird spots on his face and according to sources the red patches are likely caused by a medication like Efudex which is used to treat early skin cancers. Add to that the fact that he has been spotted outside of a famous dermatologist’s office in Beverly Hills and it looks pretty likely that Harrison is once again facing a health crisis.

No one worries more about Harrison’s well-being than wife, Calista Flockhart who is said to fear losing him to one of these crisis’. When Harrison is healthy and in true fighting form it’s easy to forget that he’s about 20 years older than Calista but at times like this I’m sure she feels and fears that age difference.

While nothing has actually been confirmed it makes sense that people close to the actor are worried. Hollywood focuses so much on appearance that it makes sense that everyone would notice that Harrison appears to be less than 100%. Do you think whatever is going on will be caught early enough to save the actor from declining health in the imminent future? Tell us your thoughts in the comments below!