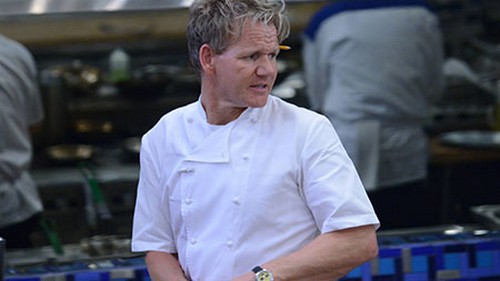 Tonight on FOX our favorite Chef Gordon Ramsey returns with a new episode of HELL’S KITCHEN called, “7 Chefs Compete – Part 2.” On tonight’s show Chef Ramsay selects the signature dish. Did you watch last week’s episode? We did and we recapped it here for you!

On last week’s show every great chef has a discerning palate, so Chef Ramsay tested each chef’s ability to identify ingredients relying solely on their taste buds in the blind taste challenge. The winning team was granted a luxurious sushi meal overlooking the ocean followed by a relaxing day of horseback riding. Meanwhile, the losing team was charged with delivery day duties and backbreaking labor in HELL’S KITCHEN. Later, Chef Ramsay presented the chefs with a surprising challenge in order to determine which contestant deserved immunity in the next dinner service and would move one step closer to a life-changing prize.

On tonight’s show in the continuation of the signature dish challenge, Chef Ramsay determines which chef has made the greatest strides in the competition, and the chef with the best dish earns immunity in the next dinner service. Later, pressure mounts in HELL’S KITCHEN as the chefs must prepare a stunning meal to impress very special guests dining at Chef’s Tables, TV host Maria Menounos and actor Jeremy Sisto. Dinner service gets off to a strong start, but one team’s service quickly heads downhill, forcing Chef Ramsay to step in at one station. Two members from the losing team go head-to-head in an emotional elimination round.

Tonight’s episode are going to be another drama packed ones, which you won’t want to miss. So be sure to tune in for our live coverage of FOX’s Hell Kitchen Season 11 “7 Chef’s compete – part 2” tonight at 8PM EST!  Find out whose dreams of winning HELL’S KITCHEN might go up in flames.

RECAP: Starting off from where they left things last week, its Cyndi’s plate vs Jon’s. And the winner is Jon. He now has immunity. However the only person happy for him is Susan. Zach and Ja’Nel can’t help but be pissed. Later on, Zach is still complaining about not winning while the Blue Team set up their serving tables.

Zach leaves to get a moment for himself but that also leaves his team down to two while the Red team still has four people. A fire ends up breaking out in the Blue team’s kitchen. Zach manages to suck it up and come back to find the room engulfed in smoke.

The restaurant is opened and there are plenty of VIPs. The first trouble comes in when Anthony is taking too long with the scallops. The red team has Cyndi. She doesn’t tell Mary when she needed a garnish for her dish. Then as the night progresses Cyndi’s station becomes sloppy.

Over at the Blue team, Jon forgot to salt one of his dishes and got called out on it but the clincher was when Anthony only cooked one lobster tail when it was supposed to be two. He cooks up some more but then its overcooked.

Susan is back on lamb tonight. Only this time she is finally able to cook the lamb through and through. The Red team is in the lead until Ja’Nael cuts herself really bad and needs medical attention. Chef Ramsay turns his attention on the Blue team. It seems Anthony ca’t be consistent in sending out fully cooked dishes so Ramsay takes a moment to ream him out in private before returning to the kitchen.

Ja’Nael returns to the kitchen but she doesn’t know what’s going on. Although she does bounce back. Anthony is able to redeem himself as well. The next drawback is from Zach. He messes up his beef and he didn’t prepare anything extra. After hearing it will take 20 minutes for Zach to cook up some more wellingtons, Chef Ramsey goes and takes extras from the Red team.

Zach further messes things for the Blue team with his many excuses and not enough dishes. He overcooked his lamb and when Ramsey asks Zach another question; things come to an end. Chef steps in and takes over Zach’s station.

It doesn’t come as surprise that the Red team wins again.

Ja’Nael volunteers to go over to the Blue team. So that was easy but Jon now has to find out who to keep. Will it be Anthony or Zach? Jon drops Anthony into the line of fire. Chef questions both guys. In the end, Chef agree with Jon and lets go of Anthony.
Still Zach isn’t off the hook. Chef warns him that he’ll be watching Zach closely now on. In next week’s promo, there appears to be nothing but fires happening in the kitchen. Who started them? Red or Blue Team?