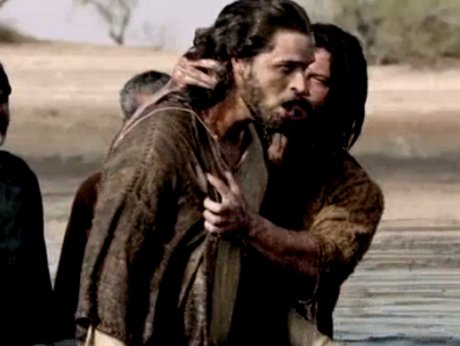 The historical miniseries is definitely making a comeback and the History Channel is basking in eternal ratings glory, most notably with their newest series The Bible. The show is produced by Mark Burnett, the man behind shows like Survivor, Celebrity Apprentice, and The Voice, and his wife Roma Downey. The couple definitely has an idea of what will intrigue the masses — and this new show seems to be doing just that.

The series begins with the stories of Abraham and Sarah in the times of the Old Testament; Sarah is unable to get pregnant and when they finally do get pregnant God tests Abraham by asking him to sacrifice his only child. As the series unfolds, countless stories from Genesis through Revelation will be told on screen, employing state-of-the-art computer generated imagery and special effects to bring a new feel to scenes that many people are familiar with in some form or another.

Burnett says that he’s tackled this monumental project in an effort to tackle “Bible Illiteracy.” He says to the Christian Science Monitor: “In school, you have to know a certain amount of Shakespeare, but no Bible. So there’s got to be a way to look at it from a pure literature point of view. If it wasn’t for the Bible, arguably Shakespeare wouldn’t have written those stories.”

The show garnered a whopping 13.1 million viewers during the first episode, making it cable’s #1 program for the year. The show can expect a steady viewership over the course of its 10 episodes, each of which will focus on different religious figures and texts.

Check out the below interview with Mark and his wife as they work to describe why they think this reimagining of some of the world’s oldest tales will be a wondrous and epic success. Tune in this Sunday for The Bible on the History Channel.