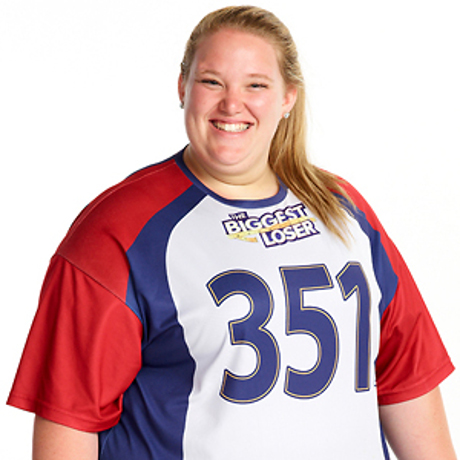 Meet Holly Mangold, the Olympic weightlifter who competed for the 2012 US Olympic team. She competed in the super heavyweight division, and her bio reveals that despite being overweight, she’s always been active.

According to her official bio, “She was born in Kettering, Ohio and raised in Centerville, Ohio, with an older and younger sister and an older brother (New York Jets center Nick Mangold). Holley played high school football and was the first female offensive lineman to play in an Ohio Division III state championship high school football game. She later attended Ursuline College, where she studied theology and sociology.”

She explains that initially she didn’t see being overweight as being a problem, saying, “I have always been big and succeeded while being big, so I thought that there was no reason to lose weight. As long as I was doing the things I wanted to do, I thought I was fine.”

At 24 years old, Holly weighs 351 pounds,  but she says that she wants to lose weight to maximize her ability at the 2016 Olympics, at which she also hopes to win gold. Holly says that although she wants everyone to be happy with their bodies, she also wants to inspire people to make healthier changes if they are willing and able.

Holley seems like one of the few contestants who’s managed to use her weight to her advantage, and one has to wonder whether she’ll be at a disadvantage at the Olympics if she sheds too much. However, she seems confident, and that’s definitely a trait the judges look for.

Are you guys rooting for Holley? Let us know your thoughts in the comments. For more Biggest Loser news, CLICK HERE.