Homeland Season 3 Teaser Trailer: Is There Anyone You Can Trust? (VIDEO) 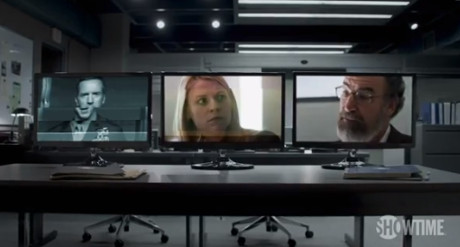 Homeland season three premieres Sunday, September 29th on Showtime and, if you’re a fan of the show, then we know better than anyone that you can’t wait for its return! In a new trailer released by the network, viewers get three interesting perspectives from characters, all of whom continue to propagate the show’s tendencies toward rich story lines filled with twists and turns.

The trailer doesn’t last long, but it’s quite intriguing. Viewers are shown three screens. The camera pans from left to right. One camera features Brody, who professes his innocence. One screen features Carrie, quite animated, defending Brody. The final screen depicts Saul *sort of* defending Carrie (he kind of mentions that she’s mentally unstable). And to wrap it all up? “WHO DO YOU TRUST?” flashes across the screen.

You may not have a great answer to that, and you might not trust any of them, which is fine in our book. But, really, WHO DO YOU TRUST? If you trust one of them, let us know who in the comments section below. Are you excited for this series to return? Check out the teaser trailer below and let us know who you think would (or wouldn’t) pass a polygraph test. Ahh, who’s lying to us?!?!