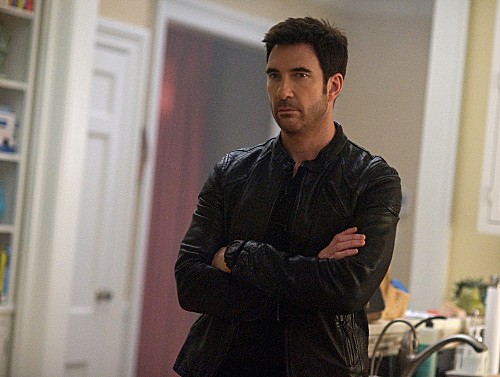 Tonight on CBS their new suspense drama called, HOSTAGES premieres. I am really excited by the show, it stars Dylan McDermott and he is one of my favorite actors.

On tonight’s show After Dr. Ellen Sanders, a prominent Washington D.C. surgeon, is handpicked to operate on the President of the United States, rogue FBI agent Duncan Carlisle and armed intruders suddenly take her and her family hostage. Scared and bewildered, Ellen soon learns the reason: unless she assassinates the President during surgery, her captors will kill them all.

The show is in a high-octane suspense drama about Dr. Ellen Sanders, a premiere surgeon thrust into a chilling political conspiracy when her family is taken hostage by rogue FBI Agent Duncan Carlisle. Ellen and her family are held captive in their home by Carlisle, a desperate man doing the wrong thing for the right reasons, who orders her to assassinate the President when she operates on him.

His highly skilled accomplices include his brother-in-law Kramer, whose loyalty to Carlisle will be tested; quick-tempered and intimidating Archer, an ex-military man with a razor-sharp tongue; and the only woman involved, Sandrine, a mysterious last-minute replacement to the team. With her family’s life in peril, Ellen faces an incomprehensible moral dilemma in order to save her overbearing husband Brian, her secretive daughter Morgan and her not-so-innocent son Jake. In this high-stakes standoff between Ellen and Carlisle, fraught with tremendous national and personal consequences, the choices between right and wrong become even more blurred.

RECAP: Four men wearing balaclavas go and sneak into a families house Hours before we see Dr. Sanders who is operating on the President. A bunch of officers are outside of a bank that’s being robbed by a group of men; one of the robbers gets sniped and the order was given by FBI Special Agent Duncan, the robber demands transport or he will harm a hostage. Duncan tells him to release a dozen of them and they will talk; he gives the guy 5 minutes. The robber lets them out of the building and still has one outside, a man drives a car up to the front; the robber comes out with the hostage. and Duncan is walking up to him and shoots the hostage with his gun, the man wearing the balaclava was the actual hostage and the robber is not dead. Dr. Sanders is in the hospital and notices a man walk out of her office; she calls her husband and he apologizes for not being there and asks about he press conference. Ellen says it was great and offer to get home early to cook dinner but her husband says has plans and won’t be able to make it. Duncan visits someone in the hospital who is on chemo.

This man and woman are setting up cameras in Ellie’s house; she goes looking for her daughter and finds her listening to music on her bed; she asks about her day but says it wasn’t exciting like her moms. Her husband Brian is coaching a Lacrosse team and found some cash in an envelope and asks about it; two kids say it was beer money and fake ID’s. Duncan is with his daughter and she asks when mommies coming home, Duncan tells her that she needs to rest to get better. Her grandpa comes over and she runs over to hug him, Duncan then hugs his daughter and says he loves her and will see her soon. Brian comes home and Jake their son who was one of the two who had the beer money; Brian tells Ellen about Jake collecting money for fake ID’s and alcohol. Brian decided to ground him for 2 weeks. The people are watching them with the cameras, Morgan gets a call from a friend named Emilia who sees her crying. She tells Morgan to tell some guy something. Morgan decides she is going out and Brian tells her she is staying because of her mother making dinner. The people code named by numbers put on their balaclavas and are ready to go in.

Number 1 is at the fence and it’s his call on what to do with Morgan leaving, they have number 4 follow her. Jake gets a call from someone asking for their money, he calls his friend Kevin and says that the need to get the money or they are screwed. Number 1 goes for the dog while 2 and 3 enter the house. 4 is following Morgan and finds her with some guy, she tells them what is going on and they tell her to stop Morgan. Number 4 takes out a pistol with a silencer and the two of them are arguing; she gets out of  there and leaves. Jake is outside looking for his dog and finds him dead; he is grabbed by one of the men. Brian walks in on Ellen in the shower and scares her, Brian gets a call from someone and makes an excuse about it. Morgan gets home and one of the masked people role in; Morgan then uses pregnancy detector. Brian is in the living room and people with guns point it at them, Morgan is grabbed in the bathroom and Jake is brought to the living room as well. They all take off their masks and Duncan tells them to follow his instruction and not to be a hero; they take all of their electronics. Brian asks him what they want and they tell him to shut up; Duncan tells Ellen to go upstairs and Brian is hit with a gun trying to revolt against it. Ellen goes upstairs with Duncan; he ask if she loves her family. Duncan says that The President will die during surgery tomorrow and tells her that they took off the masks because they will be in on it together after she kills him. After tomorrow she will never see them again if she follows through or they will kill her family.

The whole family is eating dinner and Brian asks if it’s about the President; she tells him they plan on killing all of them. they bolt the windows shut and they says that someone tripped an alarm; the house gets a call and Duncan answers it and hands it to Ellen. The police ask about their security alert and Duncan points a gun at her to answer; she says it’s Ringo Starr and then a patrol officer will check in on them soon/. Duncan says he’s disappointed and thought they had an understanding; Duncan forces Ellen to the door. Ellen opens the door and says there is a mistake; the man takes off his hat and she notices him being in her office. He hands her an envelope and walks out saying the residence is clear. Duncan tell her to open the envelope, inside is a picture of her family. Duncan tells a bunch of facts about her family and tells her they have eyes and ears everywhere; they have though of everything. Duncan says he will not give her another warning; Brian picks up a knife and is swiftly taken away from him. Brian punches one of the men and they hit him with a baton. They take the kids out of there and they all go to their rooms. Duncan goes and tells Brian what he did was dumb; Brian asks if they are going to beat him more. Duncan tells him to stop being a fake and they know what he really does; they have pictures of him with another woman and says they know all his secrets.

One of the men come in and see Jake’s hidden phone; the guy sees a text from Nico and Jake says he owes him money, the guy gives an excuse to the guy. Morgan says that her friends will wonder why they can’t make contact; the girl tells they wont bother and knows about it all. Jake is crying and asks why they killed his dog. The guy brings Jake to the basement and the dog Barkley is still alive. Duncan tells Ellen to go to bed and prepare for tomorrow. Ellen runs some water and then goes to cut one of her fingers; she rinses it under water. Duncan questions why the guy showed Jake the dog; he tells him you have to always be fearless.

Duncan calls on grandpa with his daughter wondering how she is; the vice president is the man in charge of everything and asks if she will go through with it. Duncan believes she’s all for it and has no choice but to follow their demands.

Jake questions about school but the men say it’s been taken care off; Morgan says she has to go to the washroom and Duncan offers to take her. Duncan then breaks the door down and sees her with a pregnancy test; she begs for him to not tell. Ellen runs up hearing the door and says she is dehydrated and needs liquids; Duncan took the pregnancy test from Morgan and hides it. Brian asks for a moment alone with his wife, Brian says that she should do everything they say; but she says she can’t live with killing the President. Ellen hugs Jake and Morgan and Duncan tells her it is time to go; Ellen grabs her bag and Duncan then hands her the vile of the poison. Ellen gets to the hospital and is ready to commence the surgery; she has the vile in her pocket and walks in to meet the President. There is something going on and the news says that the surgery will not be going ahead and Ellen says that the surgery had to be pushed two weeks away; Ellen is questioned and says she doesn’t give up that easily.