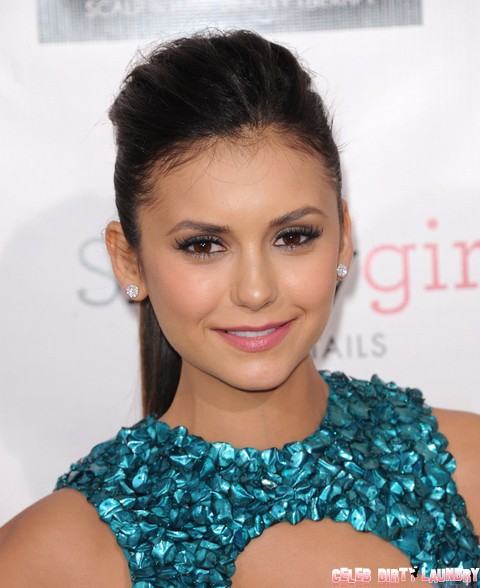 The Night of the Living Dummy’s antagonist – Ian Somerhalder – recently celebrated with Nina Dobrev on her 24th birthday. It was, according to people hiding in bushes calling themselves “sources”, a birthday bash straight from a Lesley Gore album – it was her party, but she didn’t cry, although she wanted to.

Hollywood’s latest “Power Couple” had a glamorous dinner during Dior’s Hollywood Glamour Dinner at Chateau Marmont. (It was really glamorous. They had caviar dipped in the tears of orphans.) Derek Hough, Ana Kendrick, and Nikki Reed were all in attendance to see Dobrev celebrate her 24th year of existence on this planet. Somerhalder and Dobrev left the dinner together, and partied late into the night as a couple of mannequins!

Dobrev might be 24-years-old, but she’s achieved more in her life than most window-droolers and wannabe actors. Not only is she one of the hottest television stars currently on the planet, but she’s also dating the future Mr. Christian Grey. These two love birds have managed to keep the stunning glare of public opinion out of their relationship and keep their personal life separate from their work life. This is why we love them as a couple. This is also why we are huge Somerhalder/Dobrev supporters (we’re not going to say Team Somrev, because we’re not in high school anymore).

After Jelena (Justin Bieber and Selena Gomez) fell apart like a drunken sailor with a bad case of Rum addiction, Somerhalder and Dobrev stepped into the clinch the dubious title of Hollywood’s next power couple. They have the entire world at their feet and Hollywood is drooling over them like a pack of hungry wolves. He might look like a mannequin, but he is slowly becoming the new Brad Pitt.

What do you think readers? Do you think they’re a power couple? Let us know your thoughts – and your birthday wishes – in the comments below!