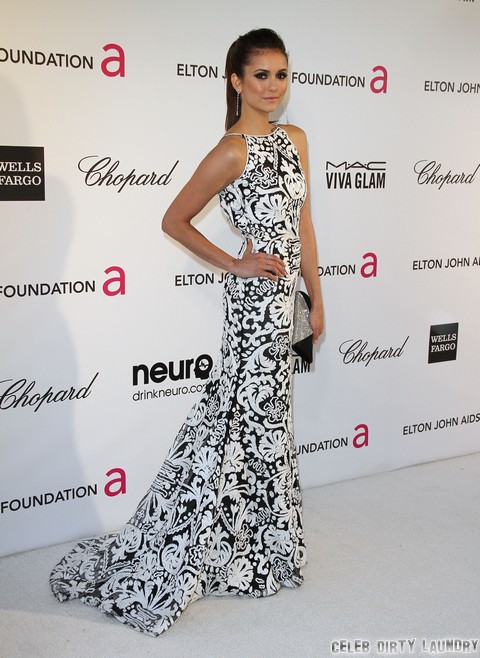 The Academy Awards were filled with a lot of predictability last night but there were definitely a few little surprises along the way. It was an evening of celebrity overload so it was easy to lose track of people and little details here and there. Perhaps one of the happiest blurbs came from Nina Dobrev via her official Twitter. She and Ian Somerhalder confirmed their obvious coupling last fall and since going public these two have been thick as thieves.

We’ve watched them globe hop, vacation with family, work together and enjoy running errands arm-in-arm. They look happy and like spending time apart isn’t high on their list of things to do. They attended Elton John’s Oscar viewing party together last night and before the festivities Nina tweeted her excitement saying,

“This may be the most epic night of my life. No explanation necessary. I’ll leave it to the imagination :)”

For you and I snagged an invite to a hot Hollywood party on the biggest night of the year would be epic, but for Nina that was only a piece of her evening.  No doubt she and Ian will revisit the Oscars one way or another next year. Epic is a once in a lifetime event, epic means that precious little can top it.

Epic for Nina last night would be a nice rock from Ian on that perfect little finger. She was teasing followers with that tweet and wants everyone to speculate about an engagement before she and Ian actually announce their happy news.  A proposal was likely the perfect beginning to an already larger than life evening for the couple.

Do you think Ian finally put a ring on it? Will an announcement be far behind? Don’t forget these lovebirds dated for a whole year before confirming it! Tell us your thoughts in the comments below!