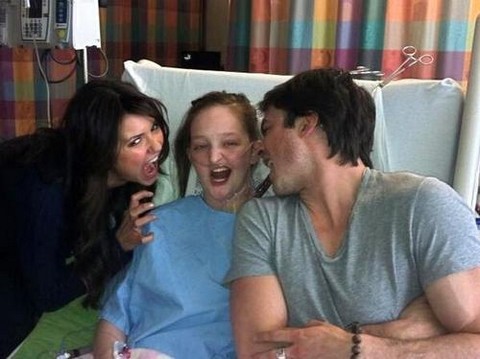 The split between The Vampire Diaries stars Nina Dobrev and Ian Somerhalder remains a bone of contention for the majority of the show’s fans. While a lot of the fans believe that Nina and Ian will get back together once they return to Atlanta to film the next season, others believe that Ian may have cheated on Nina, which may lead to awkwardness on the set.

For what it’s worth, everyone close to both of them have said the split is amicable and that there will be no issues once filming starts back up. Colton Haynes, a good friend of Nina’s, has said that he’s sure that Nina and Ian are still ‘good friends’ and there won’t be any ‘awkwardness’ when they have to work together again.

The real question is what the showrunners are planning for Nina’s Elena and Ian’s Damon on the show. Will they continue with the current trajectory that they’re on? Even though they’re loathe to admit it, many showrunners and writers do tend to get influenced in their storylines by their actors, and Elena and Damons’s romance could have subconsciously been influenced by Nina’s and Ian’s real life romance. Of course, that’s all down the drain now, so you have to wonder how they’re going to fix it.

And while everyone continues to insist that Nina and Ian are ‘great friends’, doesn’t it start to sound a little… PR-ish at times? Like, what else are they going to say? ‘Oh my god, it’s going to be so awkward, they hate each other now.’ Of course not. I would take everything with a grain of salt until we actually see them back on set with each other, and then we can start to judge based on their body language and on-set reports.