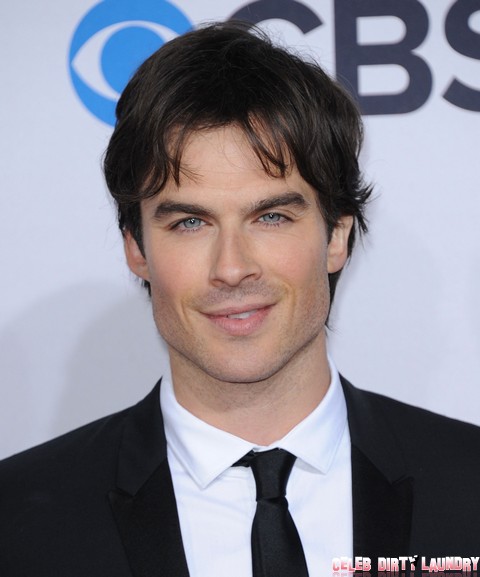 Despite starring on the same (addicting, amazing, compelling, sexy) CW show—The Vampire Diaries—Ian Somerhalder and Nina Dobrev are often on opposite ends of the country! The couple seems to only be together on days when they’re shooting together, now that I think of it! They managed to squeeze a trip across Asia into their Christmas holiday, but are back to work, making appearances at separate events, but all for the good of their show!

This weekend, Nina was seen at the Oasis Courtyard at the Beverly Hilton, where Warner Brothers and InStyle Magazine hosted a Golden Globes after party. Nina seemed to enjoy herself, using the time to hang out with costar Claire Holt (who plays Rebecca) and rub elbows with Hollywood’s other hottest celebrities! Meanwhile, Ian attended the Georgia Entertainment Gala, which honors TV and movies shot in Georgia—it’s the home of Vampire Diaries! Ian certainly got the better draw, as he didn’t have to fret about airports and flight schedules and time zones—he just hopped in the chauffeured car and put on a tie!

But the weekend parties ended too soon, and it was back to work at the crack of dawn Monday. Ian spent the day running lines in a waffle house alone, after a pre-dawn haircut! Nina caught a red eye back to Atlanta, and tweeted that she’s “locked and loaded ready to GO!” It’s a rare thing to see a celebrity couple who keep it together despite crazy travel schedules. We just watched Selena Gomez and Justin Bieber split because the time apart led to trust issues and mini affairs! But Ian and Nina seem to have worked it out—balancing work with time off with filming, allowing for a stress-free relationship that they both enjoy! Do you think they make a good couple?