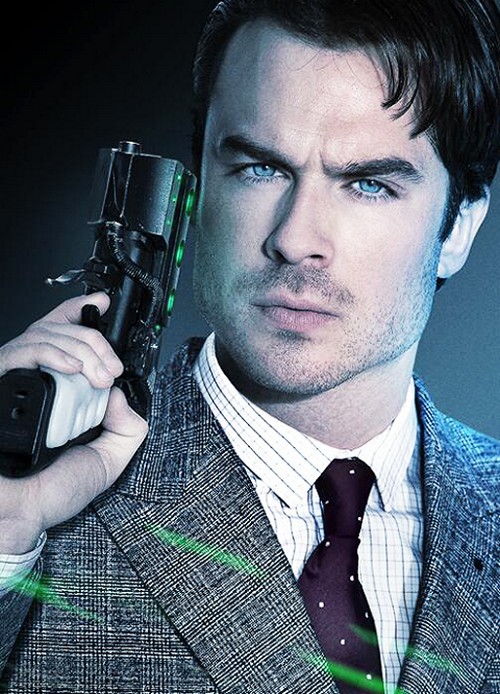 Is it just me, or is the poster for Ian Somerhalder‘s new movie The Anomaly eerily reminiscent of In Time?

Both posters have the actors holding guns up, and they’re both set against dark backgrounds, plus the same neon green black light seems to have been used. But that isn’t necessarily a bad thing. All we’ve known about The Anomaly at this point is that Ian Somerhalder stars in it, alongside Noel Clarke and the other Hemsworth brother.

The official synopsis of the movie [per IMDB] is, “A former soldier is taken captive and awakens in the back of a van where he learns that he only has a few moments to figure out how he got there.” While that description technically says thriller, the film is listed as sci-fi so expect some pretty big plot twists.

All in all, the poster’s not bad. It’s appealing, because who doesn’t want to star at Ian’s face framed by beautiful lighting? He’s holding a gun and looking pensive, and the caption at the bottom reads, “#WHATISANOMALY?”

Again, a clear hint towards the sci-fi aspects of the film. Apart from Brian Cox, most of the people involved in this film aren’t very high profile, including Alexis Knapp and Luke Hemsworth [the third Hemsworth brother]. Thus, unless they manage to create a kick-ass trailer in an incredibly appealing marketing campaign, I don’t think the movie will have the same kind of box office as most  major sci-fi films. However, Ian Somerhalder does have a pretty passionate fan base with The Vampire Diaries, so I guess you never know.

What do you guys think about ‘The Anomaly’ poster? Do you think it’s too In Time-y? Or does it make you want to see the movie? Let us know your thoughts in the comments.